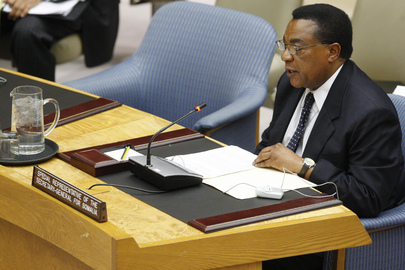 UN Photo/John McIlwaine
Special Representative for Somalia Augustine Mahiga briefs the Security Council
14 January 2011 – The United Nations today called for international financial and other support to help the UN-backed African Union peacekeeping force in Somalia (AMISOM) regain full control of Mogadishu, the war-torn country’s embattled capital, from Al-Shabaab and other Islamist groups. “The increasing troop strength will provide AMISOM with much needed additional strength… to gain full control of Mogadishu,” Secretary-General Ban Ki-moon’s Special Representative for Somalia Augustine Mahiga told the Security Council, referring to the newly authorized increase in troop strength from 8,000 to 12,000.
He said the UN Support Office for AMISOM (UNSOA) would ensure that the logistics needed for the additional troops would be made available for its mission in a country that saw its last functioning central government fall in 1991 and has been torn apart by factional fighting ever since.
But he added: “Critical gaps remain in the UN support package to AMISOM. In particular, the reimbursement of contingent-owned equipment and self-sustainment costs are not covered under the logistical support package. It is essential for the success of the mission that these costs are fully covered from contributions by Member States to the United Nations Trust Fund in support of AMISOM.”
The peacekeeping mission also faces significant equipment shortfalls. “While commending Member States for the bilateral support so far extended to the troop-contributing countries, I appeal for more assistance to narrow the equipment shortfalls as well as training support for the specialized enabling units,” Mr. Mahiga said.
In a press statement following Mr. Mahiga’s briefing, the Council stressed the importance of predictable, reliable and timely resources and called on the international community to provide AMISOM with the additional resources and support needed to better fulfil its mandate.
The 15-member body reiterated its full support for AMISOM and expressed its continued appreciation for the commitment of troops by Burundi and Uganda. It also voiced renewed concern at the continued instability and deteriorating humanitarian situation in Somalia and reiterated full support to the internationally-backed Transitional Federal Government (TFG) in its efforts to achieve peace, security and reconciliation in the shattered country.
Mr. Mahiga was presenting to the Council Mr. Ban’s latest report on Somalia which called on countries to provide urgent military and other support to the TFG to stop “foreign fighters and other spoilers” turning the region into the next stronghold of international terrorism.
The Special Representative noted AMISOM’s increased awareness of the need to protect civilians in conflict areas and investigate civilian casualties caused by its troops. He also stressed the need to train an officer corps for the Somali army and appealed for international support for the countries which have offered to provide the training.