A Somali immigrant, the 27-year-old Ahmed in critical condition after being shot in the face by a paroled gang 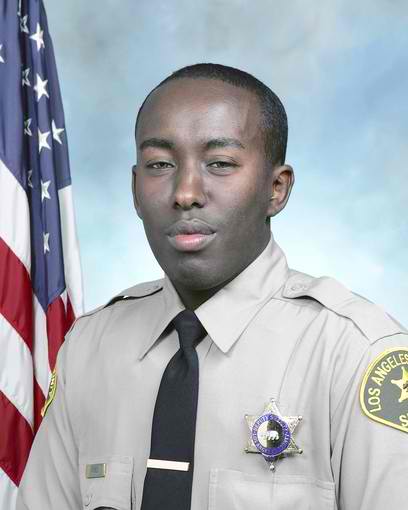 ( Los Angeles County Sheriff's Department ) Los Angeles Country Sheriff's Deputy Mohamed Ahmed, 27, was shot by a gang member while on patrol in East L.A. on Tuesday night. A Somali immigrant, Ahmed was seen as a rising star in the department who was supporting his mother and six siblings.
Mohamed Ahmed, 27, rose quickly in the Sheriff’s Department and was helping build bridges to the Muslim community. He’s in critical condition after being shot in the face by a paroled gang shot-caller Mohamed Ahmed was new to the streets. Nestor Torres was a far more familiar, some

say infamous, presence when their lives collided at a dark East Los Angeles intersection.
Ahmed was a deputy in training, just a few weeks on the beat, learning the ropes in a rough stretch of the Eastside with a veteran deputy. A Somali immigrant, the 27-year-old Ahmed was seen as a promising young deputy in the department, and supported his six younger siblings and his mother with his salary.
Torres was well-known to deputies as a Lott Stoners gang shot-caller. He’d been arrested more than 20 times, prosecutors said, and in 2004 was convicted for his role in the shooting of two gang rivals in a liquor store after they complimented one of his many tattoos. What began Tuesday night as a routine check on Floral Drive devolved into a shootout that left Torres dead and Ahmed in critical condition with a gunshot wound to the face.
“You have two very different extremes,” Sheriff Lee Baca said Wednesday, reflecting on the random encounter.
Baca said he saw Ahmed as a future leader in the Sheriff’s Department, noting that his Muslim background could help build bridges. He said Ahmed believed in the “American dream” and preached religious tolerance, volunteering his time at local Islamic community centers and doing outreach for the Sheriff’s Department with the Muslim community.
On Wednesday, doctors at Los Angeles County-USC Medical Center were treating Ahmed’s wounds as investigators pieced together what happened at the intersection. Ahmed’s condition is not considered life-threatening, but doctors said he suffered a severe wound to one of his eyes and to other parts of his face.
When he awoke Wednesday morning, his mother told officials that he asked about the condition of his partner and the welfare of his brothers. He also asked when he could return to work.
A handful of deputies are typically wounded in shootings most years. But in 2010, only one was wounded.
Authorities said Ahmed and his training officer were on patrol near Floral Drive and North Brannick Avenue in a residential district of aging bungalows below the hills of City Terrace. They saw Torres and a woman inside a vehicle parked in a red zone.
Torres was recognized by the training officer. Knowing he was a parolee, the deputies decided to talk to him. As they got out of their cruiser, Torres got out too, pulling a gun and shooting Ahmed in the face, authorities said. Torres then turned the gun to the training officer’s chest, but before he could shoot the officer deflected the weapon and used his own gun to shoot and kill Torres, authorities said. Officials have declined to name the training officer.
For Torres, a reputed gang member who went by the monikers “Demon” and “Neto,” it was the last in a long history of run-ins with the law. Court records show that in 2004, he ran into two members of the rival gang Stoners 13 at a liquor store.
“I don’t think you should be talking to me,” he told the gang members when they complimented the “LOTT 13″ tattoo. He challenged the men to come outside and fight — an offer they refused, according to authorities, because they knew Torres and another gang member waiting outside were armed. Soon after, shots rang out, with Torres’ companion unloading his gun at the men still in the liquor store.
Torres was sentenced to seven years in state prison in that case.
Born in Somalia, Ahmed immigrated when he was 7. His father died last year, sheriff’s officials said, leaving Ahmed to support his mother and six younger siblings. The Orange County resident joined the L.A. County Sheriff’s Department in 2007. Most deputies must start their careers working in the county’s jail system. Such stints can last several years, but Ahmed was able to move to patrol work in only two years.
Colleagues held vigil along with Ahmed’s family at the hospital Wednesday. Capt. Mike Parker said colleagues swapped stories about his sense of humor and high energy.
“By all accounts, the deputy injured in the incident is an extraordinary young individual, the kind of deputy sheriff we all want to see serving Los Angeles County residents and businesses,” said Steve Remige, director of the L.A. County deputy’s union. “We’re hopeful of his quick recovery.”
Baca said people who worked with Ahmed were impressed by his work ethic and his willingness to volunteer his time to help with Muslim community outreach.
“He’s an ideal ambassador,” the sheriff said. “The thing we are proud of is he can serve as law enforcement, protecting people, defending people and putting himself at risk of his life, as this incident proves.”
Ahmed was scheduled to go into surgery Wednesday, and doctors were not sure whether he would lose sight in his injured eye. But no matter the outcome, Baca said he hopes Ahmed will still have a bright future with the department.
“I still see larger things for him and my hope for him is that he will come back to work. We will cross that bridge when we come to it.”
robert.faturechi@latimes.com
andrew.blankstein@latimes.com
Posted by Unknown at 8:59 PM