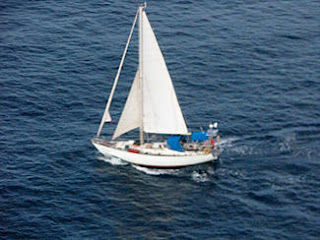 The yacht 'Lynn Rival', belonging to British couple Paul and Rachel Chandler, is seen in this picture published on the European Union Naval Force website and taken October 28, 2009 by a Spanish military helicopter off the coast of Somalia. Pirates hijacked the couple's sailing boat on Friday near the Seychelles archipelago and demanded a ransom for their release.
update on Habar-gidir Hawiye Jehadist barbaric pirates, 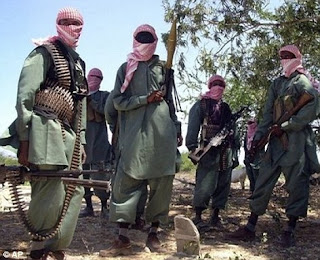 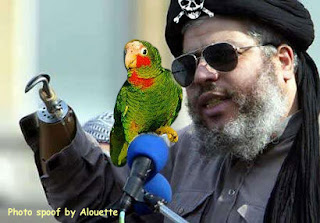 A British couple, captured last week by Somali pirates aboard their yacht near the Seychelles Islands, have been taken ashore and moved inland into Somali territory, making a rescue by foreign navies in the region more difficult.
Now the waiting, and the negotiation, begins. Ransom demands have dropped from a reported $7 million to around $150,000, apparently because the pirates have realized how little money Paul and Rachel Chandler actually have. Some pirates, not necessarily speaking on behalf of this particular pirate gang, have suggested that the Chandlers be exchanged for seven Somali pirates detained by foreign naval forces operating off the coast of Somalia.

One pirate, Abdi Yare told Agence France-Presse news agency that pirates might consider a prisoner swap.
"You know there are seven pirates who were arrested by the foreign forces after the attack, some of us are insisting to exchange the two with their friends while others just want to get ransom," Mr. Yare told a reporter for AFP by phone.While some British politicians – jumping on the Chandlers' abduction as a cause célèbre – have argued that the prisoner exchange offer is evidence that Somali pirates have now linked up with Al Qaeda militants, it is clear that pirates have done prisoner swaps before. Somalia experts say that there are plenty of reasons why pirates might be willing to seek the release of fellow pirates, including the powerful social forces of clans and family within Somali society. More pragmatically, Somali pirate leaders may simply want to reunite with pirates who have succeeded in the past to help them capture ships.
"There have been prisoner swaps before, such as the 22 pirates apprehended off the Seychelles who were flown to Puntland [a region in Somalia] in an exchange," says Paula Roque, a researcher on the Horn of Africa at the Institute for Security Studies in Tshwane (Pretoria), South Africa. "This is not unusual to see a prisoner exchange. I think for them, this is high value merchandise, and the thing that they want to exchange it for may be other pirates instead of money."

Militant Somali Islamist groups such as Hizbul Islam and Al Shabab – who control most of southern Somalia and most of the capital city of Mogadishu – may share a hard-core Islamist ideology with the Al Qaeda militants loyal to Osama bin Laden. But the larger portion of Somali society – and certainly those who make up Somalia's business sector and even its many armed militias – make their crucial decisions based on clan rather than on religion. In a society where nearly everyone is a Muslim, blood relationships are a firmer basis than ideology for deciding whom to trust, whom to hate, whom to do business with, and whom to fight.
"While it is true that Al Qaeda has penetrated into parts of Somalia, it is another thing altogether to prove a link between piracy and Al Qaeda," says Ms. Roque. "For the pirates, it is in their interests to have money and it is in their interests to have prisoners captured by the French to be released. This is an economic decision."

A long wait ahead?
Taken ashore at Haradhere, a pirate haven well north of Al Shabab-controlled territory, and taken some 60 kilometers (40 miles) inland to the central Somali town of Bahda, according to Reuters news agency, the Chandlers now begin the long waiting process that other captives have faced. The British Foreign Office said that a cash payment was out of the question. "We will not make substantive concessions to hostage-takers, and that includes the payment of ransom," it said in a statement,

Pirates often start with high ransom demands and negotiate downwards, so the falling price for the Chandlers is not unusual. Pirates who took the Saudi-owned Sirius Star – a ship that carried a quarter of Saudi Arabia's daily oil output – originally asked for $29 million, but reportedly freed the captive crew for $3.3 million pounds back in January. csm
update: Somali pirates boast of having families in Britain :Somali pirate gang who held Chandlers 'have families in Britain.... and one kidnapper's wife is an asylum seeker' 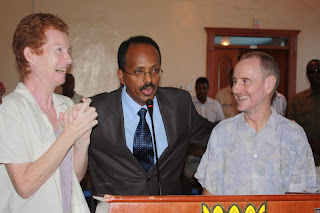 The long road to the Chandlers' release: Freed Yacht Couple At British High Commission
The Chandlers are free at last :According to Mohamed Aden "Tiiceey". mastermind behind the kidnapping
British couple's family pay ransom to Habar Gidir Hawiye gang
Posted by Unknown at 11:13 AM