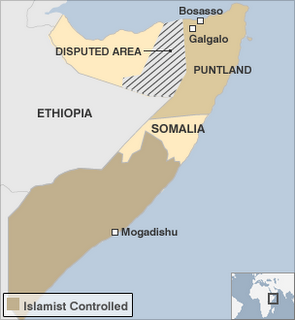 Despite international economic crisis, the Puntland Sea Piracy and human trafficking schemes are on the rise; their shares are being sold in skyrocketing prices in the unofficial stock market of Garoowe, the capital of Puntland. This is happening under the watch and stealthy encouragement of the international community. In the long run, these highly money-spinning Puntland businesses can be replicated by other organized criminal gangs elsewhere around the world and can potentially bring the international peace, trade and tourism into their knees. Besides the international problems the Puntland cartels are also detrimental to the livelihood, stability and peace of the peoples in the Horn of Africa from Djibouti to Tanzania and all the countries in between. The Puntland mafia is headed by Mr. Abdurrahman Mohamud Faroole, the current president of Puntland, a self- declared autonomous Somalia region formerly known as Majeertenia region.The whole world is now familiar with the Puntland pirate stories, which terrorize the international waters. The elderly British couple who were taken hostages at a gun point from international waters was a front page story in almost all the news papers around the world. This unfortunate couple invested their life savings on a modest yacht and planned to sail peacefully in the Indian Ocean, but their life long dreams came to a halt after they were taken hostage by the Puntland cartel. The story of this couple got a lot of media attention, but it is not the only human havoc caused by the Puntland pirates.

There was barely media coverage on the tens of thousands of shipping crews in the 1,118 ships that were taken hostage in 2010 alone by the Puntland pirate cartel. To the contrary, the international media concentrates on the ships and their cargo, but forgets to report on the misery of these poor sailors. An equally important subject that does not get media exposure is the cost hike of all goods and services to the international consumers as consequence of the increase in cost of insurance and service delays, caused by that notorious Puntland cartel.
Other stories that are never told are the effects of piracy and human trafficking on the people of the Horn of Africa, mainly the Ethiopians and the Southern Somalians. The Puntland Mafia thrives on taking advantage of the most vulnerable members from those poverty and civil war incapacitated societies. There are hundreds of young men, women and children who are crowded into small boats and inhumanly put into sea on a broad day light in Bossaso port. These individuals pay their life savings to the Puntland’s Faroole Mafia and in exchange they are promised a better future across the red sea in Yemen and in the oil-rich countries in the Arabian Gulf. The majorities of these victims are thrown over board and they give up the ghost before they set foot on their final destinations.
The people of Puntland are not immune to the side effects of piracy and human trafficking; they equally endure the cruelty of this mafia. As consequence of the immoral behavior of the Faroole mafia, many young Puntland women are raped and their futures destroyed by the pirates, who are sexually promiscuous and are high on drugs, Kat and alcohol. Many of these girls have contracted HIV-AIDS. The piracy introduced HIV- AIDS in Puntland was reported extensively by Universal TV, a Somali run TV that operates in London.
The Puntland mafia is trying to blackmail Somaliland to stop its fight against sea piracy. The Faroole Mafia sees the neighboring Republic of Somaliland as a threat to its piracy cartel, because Somaliland dealt effectively with the sea pirates who tried to seize ships along its waters and for that reason Faroole is consistently waging a terrorist war against Somaliland. Dozens of Somaliland citizens were killed by the Puntland Para-military terrorist group known as SSC.
The Puntland mafia activities are not confined only to the above stated issues, but it also includes arms smuggling for the Ogaden Ethiopian insurgents. The Faroole administration sees Ogadenia as a future gold-lying hen, because Ogadenia is said to be rich with oil and natural gas and the eastern Ogaden population hails from the same Darood clan as the Majerteens- the sub clan of Faroole.
The Puntland aggression does not end there but it has far reaching ambitious plans, it wants to bring all Somali inhabited territories in the Horn of Africa under its control through terrorism and intimidation. Even the Puntland ally, the TFG of Somalia is not exempted from the power expansion of Puntland. The transitional Federal Government of Somalia, who controls few blocks in Mogadishu, is constantly blackmailed to give more concessions to the Puntland cartel. Just this week the Puntland cartel has threatened to cut ties with the TFG of Somalia unless their unrealistic demands are met. Running the TFG of Somalia from Garoowe through remote control is one of their goals.
The international community has put in place a strong navel watch on the Somalia coast, but their efficacy is minimal. The reason why this strong naval force is not able to work and stop Puntland sea pirates and human trafficking is simply because there is no international desire to uproot the source of the piracy, the international community gives a symptomatic treatment to an illness that requires an all out panacea. We can even say that the international community is playing a covert supportive role for the Puntland cartel. Puntland receives development assistance, a generous budget to fight sea piracy and even more money to rehabilitate sea pirates. Puntland spends most of these grants on more boats and equipment to upgrade the capabilities of its fleet of boats and it is continuously expanding its reach beyond the Somalia coast. There were reports that ships have been snatch more recently from the Sultanate of Oman waters and as far as waters very close to India. To make a bad situation even worst, some countries have paid hefty amount of monies to Puntland to hire a South African mercenary company to train its forces.
To bring this inhumane saga to an end, the international community should take the following steps:

This article was posted by Neptune Maritime Security
Posted by Unknown at 4:01 PM