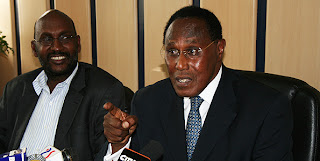 •People with extremist ideas joined the demo, says minister
Foreign terror groups aimed to use Friday’s deadly demonstrations to divide Kenyans along religious lines with a view to causing wider strife in the country.Intelligence reports indicate that some of the people behind the march were planning “something bigger” than the riots that saw at least one man shot dead and six police officers injured.
They aimed to paint Kenya as a place that is hostile to Muslims to win support for their cause, according to Internal Security minister, Prof George Saitoti.“The government will work with Muslim leaders to root out the criminal elements and maintain harmonious co-existence among all faiths,” he said.Security officials are on high alert after it emerged that sympathisers of the al-Shabaab militia group took part in the protests staged to demand the release of radical Muslim cleric Sheikh Abdullah al-Faisal.
Prof Saitoti confirmed that the government had received information that the demonstration would be infiltrated by “violent foreign elements” from a neighbouring country, including criminals out to cause mayhem.
Officials of The Council of Imams and Preachers of Kenya (CIPK) and Muslims for Human Rights (MUHURI) held a joint press conference on Saturday at CIPK’s offices in Mombasa and called on police to arrest those responsible for the killing of protestersThey promised to issue a fresh statement next Friday “if the State fails to take concrete action”. They did not specify the action they would take if nothing is done to the officers who broke up the demo.Leaders from both organisations criticised Police Commissioner Matthew Iteere and called for international inquiry into his conduct.“It was saddening to see tear gas canisters and live bullets being fired at Muslims inside Masjid Jamia,” said CIPK organising secretary Sheikh Mohammed Khalifa in reference to the Nairobi mosque near where the demonstration took place.In Nairobi, Prof Saitoti said infiltration by the said foreign elements was the sole reason for the cancellation of a permit to allow supporters of Sheikh Abdullah al-Faisal to protest and that the cleric should be deported immediately.The protests that caused destruction of property and disrupted business in the central business district for hours have since been denounced by leaders of the Jamia Mosque. And, even as he ordered an inquiry into the saga, Prof Saitoti said the government was closely monitoring the situation.“These individuals had planned mayhem . . . it was supposed to be bigger. Intelligence reports indicate that these individuals were sympathetic to al-Shabaab,” said the minister at his Harambee House offices on Saturday.He added: “It is based on these facts that the police declined to issue a permit for the demonstration.”
“Unfortunately, this advice was ignored by those who did not heed the wise counsel of the leadership of Jamia Mosque,” he added. Prime Minister Raila Odinga instructed the Internal Security ministry to carry out “comprehensive and urgent investigations” into the riots and the death of a protester.In a statement, the PM also appealed to the Muslim community to remain calm and give the government time to address their grievances.“At any one time, the government has more information on matters than the public knows,” he said in an apparent reference to the radical cleric, who is on an international watch list of suspect persons. He said the confinement of the cleric was a sensitive security matter that the government was handling delicately, and it should be given time.Mr Odinga, at the same time, said police must desist from using live ammunition to quell riots.“Use of live bullets has led to loss of lives before, and it is something police must do everything possible to avoid,” said the PM.But MUHURI executive director Hussein Khalid argued that fundamental human rights laws and the Kenya Constitution were violated by the police in disrupting peaceful demonstrations, adding that it was not their responsibility to license demonstrations in the country.CIPK treasurer Sheikh Omar Suleiman accused President Kibaki and Prime Minister Raila of failing to safeguard Muslims’ rights contrary to their 2007 pre-election pledges.Reports indicate that during the Friday demonstrations one protester clad in fatigues and a black balaclava waved the flag of the al-Shabaab, the Somali rebel group that has been accused of being allied to al-Qaeda.

The protester is said to have taunted crowds by passing his finger across his throat in a slitting gesture. In the ensuing fracas, several civilians sustained injuries. Six police officers were seriously injured in the riots. One officer sustained gunshot wounds from a pistol that was apparently fired by a protester.

Said Prof Saitoti: “The demonstrators were definitely infiltrated by individuals with extremist ideas.”

“These foreign elements would wish to portray an image that the local Muslim community is being unfairly targeted by the government. It will not happen.”“The government will work with Muslim leaders to root out criminal elements and maintain a harmonious coexistence amongst all faiths.”He spoke moments after chairing a meeting attended by top security officials, Muslim leaders and MPs mainly from North Eastern Province. Those in attendance included Internal Security PS Francis Kimemia, Police Commissioner Iteere, Intelligence chief Major-General Michael Gichangi, AP commandant Kinuthia Mbugua and Nairobi PC Njoroge Ndirangu. Also present were Cabinet ministers Yusuf Haji and Mohammed Elmi, assistant minister Aden Duale, MPs Abdikadir Mohamed, Sophia Abdi, Adan Keynan and other top Muslim leaders. Prof Saitoti at the same time defended the inability of the police to immediately quell the riots, saying that “they did their best”.The minister said the government will continue to monitor the activities of foreigners, especially those who visit the country on tourist visas but end up engaging in activities that compromise national security.
“We are a peaceful country, but we would like to caution visitors not to take our hospitality for granted,” he said.Fisheries Development minister Dr Paul Otuoma said that Kenyans will not allow foreigners to come into the country and disturb the peace.“The person they are protesting about and protecting is a person that has been banned in many countries, including his own country of birth,” Dr Otuoma said.The minister, who spoke at Nakhasiko during the burial of Edna Odongo, wife of his ministry’s public relations officer Patrick Odongo, said Kenya is a tolerant country, and nobody should try to cause turmoil in the name of a religion.“Our country’s laws must be followed to the letter,” said the minister. “We have Hindus, Christians, Muslims and many other religions groups who have been given freedom to worship, and no one should use religion to disrupt order in the society.”Sheikh al-Faisal is said to have entered the country by road at the Lunga Lunga border point with Tanzania on a tourist visa. The government has in the past week attempted to deport the man, who was stripped of his British citizenship after serving a jail term for his links to terrorist groups. Government efforts to deport him have failed because no country wants him to set foot on their territory. There are no direct flights from Kenya to Jamaica.