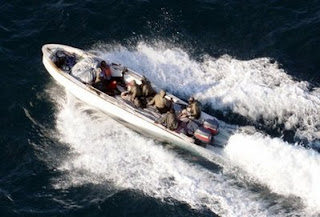 Two daring raids by naval commandoes of South Korea and Malaysia against Somali pirates show that some the navies operating in the area are taking a harder line in order to check the the rise of lawlessness off the east coast of Africa.

Two daring raids by naval commandoes of South Korea and Malaysia against Somali pirates show that some the navies operating in the area are taking a harder line in order to check the the rise of lawlessness off the east coast of Africa.Experts say the two raids on Friday could be seen a sign of more aggressive tactics to counter the pirates, and added that pirates could increasingly use hostages as human shields if raids become more common.
Despite patrols by an international flotilla of modern warships patrolling the Indian Ocean off the east African coast and Arabian Gulf and diverse strategies employed including the sinking of pirate boats, Somali pirates have been relentless.They captured a record 1,016 hostages in 2010 and currently hold 32 vessels and 746 crew members of various nationalities after hijacking another six ships so far this year, according to a recent report by the International Maritime Bureau.Eight crew members died and 13 were wounded in Somali pirate incidents in 2010, up from four dead and 10 wounded in 2009. There were no pirate killings elsewhere in the world in 2010, the China Daily reports.
Alan Cole, the head of the UN's anti-piracy program at the UN Office on Drugs and Crime, said the South Korean and Malaysian navies may have resorted to using the commando raids out of frustration that other strategies employed to tackle piracy were not working."There is a good chance that navies will increase the numbers of patrols and step up military activity to try and deal with this problem," he said.South Korean commandos raided a cargo ship in the Arabian Sea before dawn on Friday, killing eight Somali pirates and capturing five as they rescued all 21 crew members.Their success came on the same day that Malaysia's navy successfully rescued a chemical tanker and its 23 crew members from Somali pirates in the Gulf of Aden. Pirate-fighting tactics may change after raids