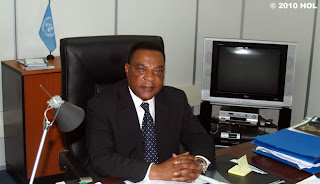 26 January 2011 – The United Nations and the African Union will hold a high-level meeting in a few days to review efforts to achieve peace, security and reconciliation in strife-torn Somalia, which has been suffering through two decades of conflict and numerous humanitarian challenges. The meeting will be held in Addis Ababa, Ethiopia, on the sidelines of the African Union Summit which opened today, and will be jointly convened by Secretary-General Ban Ki-moon and Jean Ping, Chairman of the AU Commission. Mr. Ban’s Special Representative for Somalia, Augustine P. Mahiga, noted that the meeting comes at a very crucial juncture, given that, under the Transitional Federal Charter, the interim authority’s mandate is set to expire in August. “We have less than seven months before the end of the transition, and yet a lot still has to be done,” he stated in a news release issued by the UN Political Office for Somalia (UNPOS). Several tasks remain to be completed such as continuing initiatives on reconciliation, building civilian and security institutions and the completion of the constitution-making process. Mr. Mahiga announced that the Transitional Federal Government (TFG) – which is supported by a UN-backed AU peacekeeping force, known as AMISOM – has come up with a road map, outlining priority tasks which it will have to achieve towards the end of the transition. “There was unanimous agreement, both inside and outside Somalia, that the transitional period has to end in August as envisaged under the Djibouti Peace Agreement,” he said, referring to the UN-facilitated peace process that began in 2008.“In the meantime, consultations are underway to develop a consensus on how to end the transition and on the nature of post-transition political arrangements,” he added. Somalia – which has not had a functioning central government since 1991 – has been torn apart by decades of conflict and factional strife, more recently with al-Shabaab Islamic militants. The country is also facing a dire humanitarian crisis in which 3.2 million people, more than 40 per cent of the population, is in need of aid.
Mr. Mahiga called for internal consultations among the Somalis themselves to build consensus on the way forward. “It is critical that the consensus-building process ensures that the gains made so far are sustained and entrenched beyond the end of the transition,” he stated. “After two decades of suffering, the time has come for Somalia to return to a nation in which its citizens are allowed the opportunity to live a fruitful life in peace and security.”News Tracker: past stories on this issue