Ogendia State President accused of masterminding "ethnic cleansing" deportations and killings of somali citizens in The majority of the Somali region
Several hundred Somalis from the Twin Cities, St. Cloud and other communities protested a visit to Minneapolis Sunday by Abdi Mohamud Omar, president of the Oga'den region of Ethiopia, where ethnic Somalis have been fighting for more than a decade against Ethiopian rule. 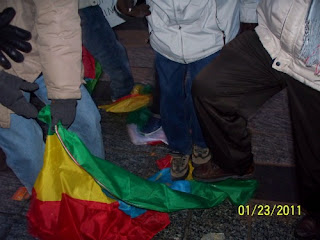 Shouting and carrying signs across S. 7th Street from the Radisson City Center Hotel from noon to 6 p.m. in frigid weather, the protesters accused Omar of genocide, systematic rape and other human rights violations. One protester was arrested for disorderly conduct. Security was tight in the Radisson and throughout the City Center. The Twin Cities has one of the largest Somali populations in the United States, and Omar has supporters among Somalis as well. It could not be determined Sunday why he was in Minneapolis

The dh@b@dh!l!f has also been kicked out from four hotels in Minneapolis after the hotel managements couldn't control the crowd and the demonstrators. He is now hiding in a friend's house in unknown location in St.Paul. Amazing efforts from Somalis in the US, indeed!  more.. somali net
Banaanbaxii Somalida Ogadenia MPLS jan 23 11

The Ogaden Human Rights Committee Report, issued on August 8th, contains a lengthy list of appalling extrajudicial killings that are comparable to, if not worse than, those of Darfur. Ogaden: Litmus Paper for the Kinijit Amhara aspiring tyrants of 'Ethiopia'