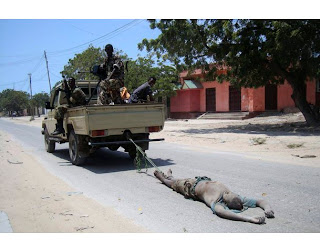 The Transitional Federal Government (TFG) executed three soldiers convicted of murder by a military court. The executions were carried out Mogadishu.

The bodies of two men were found at Warshadaha Street in Mogadishu. Both men were between the ages of 45 and 50, and had died from gunshot wounds to the head.

Five suspected members of al Shabaab were arrested in Burao, Somaliland region of somalia. Locals reported that foreign soldiers carried out the arrests, adding that they appeared to be British or from another Western country. Somaliland’s administration has yet to comment on the incident.

Al Shabaab issued a communiqué on January 14, 2011 on jihadist forums claiming responsibility for two attacks carried out in Mogadishu on January 13. One attack involved an explosive device in south Mogadishu that killed two soldiers. Al Shabaab claimed that following the blast, soldiers cordoned off the area and fired indiscriminately at civilians. The second attack involved a hand grenade tossed into a Somali military center, causing an unknown number of casualties.

An al Shabaab communiqué issued January 16, 2011 announced the punishment of a thief and the graduation of 130 preachers from the Sheikh Abdullah Azzam Institute for Preachers in Mogadishu. The thief, Abdulrahman Muhammad Abdullah, was apprehended in the Lower Jubba region and had his hand amputated as punishment. He was convicted of stealing an AK-47 rifle, $1000 and 2 million Somali shillings. The sentence was carried out in Kismayo.

Al Shabaab spokesman, Sheikh Ali Mohamed Rage, confirmed that over 85 al Shabaab militants have been killed over the past 24 hours in fighting in Mogadishu’s northern district. Rage added that an additional 280 militants have been sent to Mogadishu to launch new attacks on AMISOM and TFG positions.

Mortars exchanged between al Shabaab and AMISOM forces killed at least four people in Mogadishu. The shelling began when al Shabaab bombarded the Somali parliament building, and AMISOM forces responded with mortars in the Hawl Wadag and Wardhigley districts. Sources report that several AMISOM shells fell into the Siiney and Bakara markets, killing over thirty civilians. Fighting also occurred in Hodan district. Locals reported that the fighting began when al Shabaab fighters launched hit and run attacks on military positions in the city.

Fighters loyal to al Shabaab arrested Mohamed Osman Arus, the former spokesman of Hizb al Islam, in Mogadishu after he refused to accept a post as head of security for the Lower Shabelle region in the al Shabaab administration.

Al Shabaab officials met with businessmen in the Bay and Bakool regions to discuss initiatives to aid Somali civilians affected by drought. The meeting took place in the town of Baidoa, and was highlighted by Sheikh Mahad Omar Abdikareem, al Shabaab’s chairman in the region, calling for businessmen to pay a monthly tax in support of the mujahideen’s efforts to drive out AMISOM forces.

Al Shabaab militants in the Elbur district in Galgudud kidnapped Shire Diriye Osman, a prominent Somali man. The reasons behind the abduction are still unclear.

Al Shabaab announced that businessmen in Beled Hawo in Gedo region must use Somali shillings instead of Kenyan shillings, which have been the accepted currency in the area for over nineteen years.

Al Shabaab gunmen detained fifteen Somali women who they claimed were in violation of the appropriate dress code. The women, who were detained in the villages of Lafole and Elasha Biya, were accused of wearing light clothes through which their bodies could easily be seen.

Puntland, a semi-autonomous region, broke relations with the TFG, according to an official Puntland government statement. The TFG “does not represent Puntland in international forums” and Puntland calls on “the UN Political Office for Somalia (UNPOS) to reconsider its position and support for the TFG at the expense of other Somali stakeholders.”  Allvoices,
Posted by Unknown at 6:15 PM