Uganda foils attack on army base 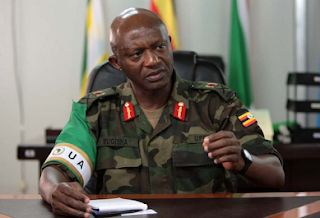 Kampala - The Ugandan army says it has thwarted a planned grenade attack on a military base in the capital Kampala by a former member of a disbanded Islamist rebel group. Uganda Peoples' Defence Forces spokesman Felix Kulayigyetold reporters late on Tuesday: “There was a planned grenade attack that should have occurred last Sunday at one of our detachments in this city.

“The attack was to be carried out by a former member of the Ugandan National Rescue Front II (UNRF II) whom we arrested with two grenades. This gentleman is said to have purchased the grenades from South Sudan.” The UNRF II was active in northwestern Uganda in the late 1990s but signed a peace deal with the government and was integrated into the army in 2002. Kulayigye said two other people were also arrested in connection with the plot. He named one as Annet Namwanga and said her husband, exiled journalist Lawrence Kiwanuka, had paid for the planned attack and had also previously funded rebels in Uganda. Namwanga was the only suspect he named and he did not say which military facility was targeted. The three suspects are due to appear in court on Thursday. Kampala was hit by twin suicide blasts in July 2010 that killed 79 people watching the World Cup final on television, the first such attacks on foreign soil by Somalia's al Shabaab group, which is linked to al Qaeda.
The Somali rebel group has sworn it will attack the city again in revenge for Ugandan troops making up the majority of an African Union force that has been protecting a fragile administration in Mogadishu.
Uganda is due to hold national elections on February 18, and countries including the United States have warned that rebels may attempt to disrupt the vote with violence. - Reuters