The Myth of Homegrown Islamic Terrorism 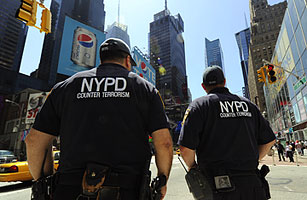 There is a specter haunting the U.S. It is "one of the things that keeps me up at night," Attorney General Eric Holder said last month. North Carolina Representative Sue Myrick, a member of the House Intelligence Committee, has warned President Obama that "there is no doubt" the problem has become "a global threat." The incoming chairman of the House Homeland Security Committee, Peter King, plans to convene hearings next month on the danger "that threatens the security of us all." In the wake of the Tucson, Ariz., tragedy, you might think that such high-profile alarm would center on the shortcomings of America's mental-health system or the inadequacy of the country's gun laws. You would be mistaken. Instead, some members of the political class remain fixated on what they regard as a greater national emergency: the purported rise of "homegrown" Islamic terrorists. They point to a string of examples of jihadist activity by U.S. citizens of Muslim faith: the Somali-born Portland, Ore., man who tried to detonate a dud car bomb planted by the FBI at a December tree-lighting ceremony; last summer's failed Times Square bombing by a naturalized Pakistani; the 14 men charged last August with providing support to Islamist militants in Somalia. And then there's Anwar al-Awlaki, the Yemen-based Internet imam late of Falls Church, Va., who intelligence officials say now acts as a regional commander for al-Qaeda, with the charge of recruiting impressionable American Muslims to take up arms against their country. In the eyes of some, al-Awlaki and his ilk represent the vanguard of an even more sinister trend: the growing "radicalization" of the estimated 5 million Muslims living in the U.S. "Radicalization is taking place inside America," Myrick wrote in her letter to Obama. "The strikingly accelerated rate of American Muslims arrested for involvement in terrorist activities since May 2009 makes this fact self-evident." Actually, it doesn't. Though acts of violent extremism by U.S. Muslims appear to have grown, their potency has not. American Muslims remain more moderate, diverse and integrated than the Muslim populations in any other Western society. Despite the efforts of al-Qaeda propagandists like al-Awlaki, the evidence of even modest sympathy for the enemy existing inside the U.S. is minuscule. The paranoia about homegrown terrorism thus vastly overstates al-Qaeda's strength and reflects our leaders' inability to make honest assessments about the true threats to America's security.
Those who beat the drums about the homegrown terrorism threat often gloss over one salient fact: for all the publicity that surrounds cases of domestic jihad, not a single civilian has been killed by an Islamic terrorist on U.S. soil since Sept. 11. (The killing spree by Major Nidal Hasan at Fort Hood, Texas, in 2009 doesn't fit the standard definition of terrorism: his motives were not wholly ideological, nor did he deliberately target civilians.) That's due to a number of factors, including the military's assault on al-Qaeda's leadership, tougher homeland-security measures, smart policing and some degree of luck. But the fact that every homegrown terrorism plot has been foiled before it could be carried out also demonstrates the fecklessness of the terrorists themselves. In nearly every case — including that of Faisal Shahzad, the Times Square bomber, who came closest to succeeding — homegrown terrorists have been found to have acted almost entirely alone. There has been no vast conspiracy. Terrorist attacks may not require much money or ingenuity, but a lone wolf has little chance of pulling off the kind of mass-casualty strike that counterterrorism experts worry about most Of course, violent individuals — from Hasan to Jared Loughner — are still capable of causing mayhem. But there's no evidence that large numbers of American Muslims are inclined to do so. Though alarmists point to the alienation of young Muslims in Western Europe as a sign of things to come for the U.S., the likelihood of that happening there is remote. A Gallup survey conducted in 2009 found that American Muslims report vastly higher rates of life satisfaction than do their counterparts in other Western countries — and higher rates than the populations in every Muslim-majority country except one, Saudi Arabia. In the past 10 years, fewer than 200 people in the U.S. have been indicted on suspicion of jihadist activities. A comprehensive report by the Rand Corporation last year concluded that just one out of every 30,000 American Muslims could be said to have joined jihad, "suggesting an American Muslim population that remains hostile to jihadist ideology and its exhortations to violence.  So why does the myth of homegrown terrorism persist? In part because, like every hardy political meme, it serves the interests of loudmouths on both ends of the ideological spectrum. To the right, the threat of homegrown terrorism helps to perpetuate the notion of a ceaseless, civilization-wide struggle against Islamic extremism. To the left, the prospect of American Muslims taking up jihad fits with the idea that the U.S.'s foreign policy is creating a new generation of terrorists. And yet al-Qaeda is weaker and less capable today than it was before Sept. 11; its appeal to mainstream Muslims around the world is shrinking, rather than increasing. The fact that Osama bin Laden wannabes like al-Awlaki have risen to such prominence is testament to the evisceration of al-Qaeda's leadership. The U.S. faces far bigger and immediate challenges to the welfare and security of its citizens, not least from the ease with which unstable individuals can legally obtain and use deadly firearms. Addressing that danger will do more to protect Americans than obsessing about the phantom threat of homegrown terrorism ever will..".time.com