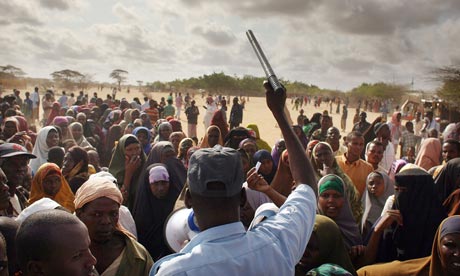 A security officer tries to keep order in Dadaab, Kenya.  Photograph: Spencer Platt/Getty Images
Twenty years after the first Somali refugees fled the crisis that ousted President Siad Barre, thousands of people continue to pour across the border from Somalia into north-eastern Kenya into the largest refugee complex in the world.
Today, the three refugee camps – Dagahale, Ifo and Hagadera – that make up the overcrowded and chronically underfunded Dadaab complex are home to more than 300,000 people and three generations of refugees.
Mohamad Ali was one of the first to arrive from Somalia when civil war broke out in 1991. He didn't expect to stay long, but in 20 years he hasn't set foot outside the complex.
Refugees aren't allowed to leave the camps unless they receive special movement passes. If caught without a pass, they risk arrest, detention or expulsion. Special buses can be taken between each of the complex's three camps, which are separated from one another by a few kilometres of dust and dry heat.
This is the second time Ali has been made a refugee. Ethnically Somali, he was driven out of his home in Ethiopia to Somalia by the war between the two countries in 1977.
He is now 79 years old, and calls Dadaab his home. It's Kenya's fourth-largest city, although no Kenyan lives there, he says.
The camps were originally designed to house 90,000 people, but with the ongoing crisis in Somalia, official estimates suggest that around 5,000 new refugees arrive each month. Richard Floyer-Acland, the UNHCR representative in Dadaab, put the number closer to 9,000.
After Afghans and Palestinians, Somalis constitute the world's third-largest refugee population.
Three years ago, the UN refugee agency declared the Dadaab complex full, and it continues to lobby Kenyan authorities for access to new land to extend it. For now, new arrivals set up camp where they can, gathering on the outskirts of the complex.
Floyer-Acland says plots ran out in August 2008. New arrivals now have to double up, with two families per plot, or seek land not officially cleared for settlement. More than 18,000 people have settled on the edges of the camps, he says, on land that technically belongs to local communities.
But while the extension of the complex could help solve the problem of physical space, it would leave the hardest questions unanswered: how long can a refugee camp exist, and for how many generations?
"Opening another warehouse to store more people is no solution to our plight. What we need is a lasting political solution for Somalia, and it's time the world focused efforts and resources to achieve this," says Ali.
For Elizabeth Campbell, of Refugees International, a US-based advocacy group, Dadaab represents a double failure – a failure of the international community to help bring stability to Somalia and to support the hundreds of thousands who have fled the crisis.
"Though Somalis constitute the largest protracted and unfolding refugee crisis, they are not a priority for anyone and do not garner the political attention necessary to change the situation," says Campbell. "There's no sense of urgency. Instead, there's a sense that Somalia's a disaster and that's it. The political imperative is counterterrorism, and nobody seems to care about an entire generation that has known nothing but war."
Two decades after the first refugees settled in and around Dadaab, the camps continue to operate on an emergency basis.
Part of the problem is that the Dadaab camps and the hundreds of thousands of refugees they house are caught in the middle of a complex institutional problem: when should emergency relief end and development assistance begin? For those in the field, this is sometimes called the "relief-to-development" gap.
"When people think about humanitarian issues, they think about Japan. There's a disaster, but then after a period of time, it comes to an end," says Campbell.
But what happens to those caught in crises that persist for decades? Camps can be extremely efficient in delivering aid quickly after emergencies, but they fail to mobilise the resources required for medium- and long-term development.
A 2010 report from Refugees International on the challenges of long-term investment in the Kenyan refugee camps noted that: "Half of the year UNHCR is scrambling to provide enough water to refugees, and the other half of the year UNHCR is responding to the raging floods that emerge from the rainy season."
According to Campbell "the humanitarian funding structure is simply not set up to deal with people who have been living in crisis for 20 years"."At the same time, the entire development industry is simply not responsive to what they consider a humanitarian situation."
This month, Unesco's Global Monitoring Report noted that only 2% of the world's humanitarian assistance spending goes towards education.
Last year, the UNHCR received only 20% of the $30m it needs to educate refugee children.

But the situation in Dadaab also raises questions about the response of host governments to protracted refugee settlements.
In April last year, 162,000 Burundian refugees become Tanzanian citizens, the result of an internationally brokered solution to a decades-old crisis.
Since 1972, hundreds of thousands of Burundian refugees had made western Tanzania their home, and were repeatedly denied access to citizenship. But when the US and Canada agreed to resettle large numbers of refugees, and tens of thousands more decided to return to Burundi, the Tanzanian government agreed to grant citizenship to those who could not or would not leave.
Though such a solution could work in Kenya, says Floyer-Acland, "at the moment there is no sign that the Kenyan government is thinking about local integration".
More than $12m of donor funding had been committed for the extension of the Dadaab camps, to provide space for 80,000 refugees and relieve overcrowding in the complex. But Floyer-Acland says the Kenyan government told the UNHCR to stop construction in January.
The security ministry, says Floyer-Acland, is loath to see too much development in terms of infrastructure and improved conditions, for fear this might encourage Dadaab's refugees to stay in the country.
Though Dadaab is exceptional because it is the largest refugee complex in the world, and still growing, most of the world's refugees now live in such protracted, long-term, camps.
The global number of refugees has been in steady decline in recent years, but a growing percentage of asylum seekers are spending more and more time in exile, far from the international spotlight that accompanies the early days of a humanitarian crisis.
For Campbell, Dadaab is "a glaring example of the failure to provide development funding in protracted refugee situations".guardian.co.uk,             Thursday 24 March 2011