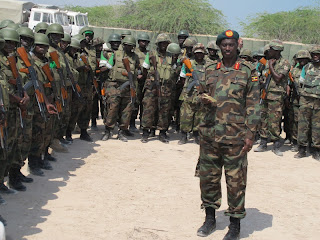 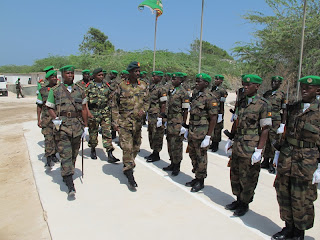 During a four day visit, the Generals saw firsthand the progress being made by AMISOM forces in support of the TFG.
In a joint statement to field commanders, the Chiefs declared that both Burundi and Uganda had committed the additional 4,000 troops mandated by the UN in December and that they were already heading for pre-deployment training. Burundi has already deployed one battalion.
“There is no peace to keep here, so each and every day our forces support the TFG to expand their control of Mogadishu.  We are making steady but consistent progress and we now have 60% territorial control as a result of the recently implemented offensive and we will continue to build on this.
“We have great confidence that other countries will join the mission but in the meantime it is our duty to support our Somali brothers.  We must continue our work here and we will do so.  The extremists cannot win.  Their defeat cannot be immediate but it will ultimately come. 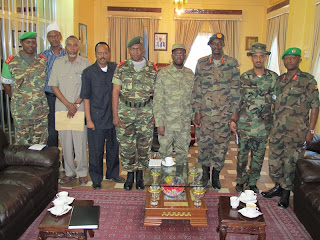 “Integration of TFG soldiers within our own units has been stepped up and is working very well.  This will ultimately advance the day when Mogadishu is liberated and they can take over.
Each country has pledged a further 2,000 troops and anticipate an efficient deployment around the middle of the year.
The Defence Chiefs met with the President of Somalia and the Prime Minister of the Transitional Federal Government, cabinet ministers, and other government and grassroots local leaders.

“The President, the Government, the Cabinet and most of the MP’s are now here in Mogadishu and here consistently.  We believe that they are working very well and understand the need for government to fill the space behind the security we are creating.
“The solution here is not military alone.  It is political and humanitarian also.  There have been dramatic changes and improvements in the way Mogadishu is governed.  Normal life is starting to return.  We see street lights, cleaning, even rebuilding.  All signs of a stabilising situation.
“The Government must continue to focus on their number one stakeholder – the Somali people.  They must keep faith with the progress being made.  This is the beginning of the end of the anarchy and strife.”
The Defence Chiefs completed their working trip and left Mogadishu on Thursday 24th.
ENDS