“The Extent of Radicalization" Among American Muslims

Rep. King: hearings meant to “inform and not to inflame"
House Homeland Security Chairman Rep. Peter King (R-NY) held the first in a contentious series of hearings today examining what he calls the “radicalization of American Muslims.”Witnesses covered both sides of the issue, with testimony from Congressman Keith Ellison (D-MN), the first Muslim American to serve in the U.S. House, followed by two men that related their personal accounts of family members who were recruited by Islamic radicals.After the hearing, Representative King was joined by his colleagues and a few witnesses for a press conference. He reiterated the necessity of the hearings, saying they are meant to “inform and not to inflame.”
Over 50 Democrats sent a letter to the chairman, warning that the hearings will jeopardize the trust between Muslims and law enforcement. Additionally, many other organizations have spoken out against the hearing, saying it will send the wrong message by singling-out U.S. Muslims. C-span 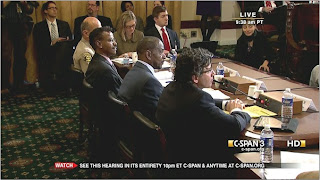