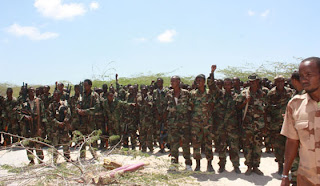 MOGADISHU, (Tuesdaytf.sf)  Somalia’s pro-government forces closed in today on bastions of the insurgent Shebab group, in their largest coordinated drive in years to wrest back the country from al Qaeda-inspired rebels.The offensive started last week with a major battle in Mogadishu that saw government troops reclaim large swathes of the capital, where the government had long been confined to a few blocks by the sea.But government and allied troops have in recent days opened new fronts.The Western-backed Somali transitional government’s troops are backed by the 8,000-strong African Union mission in Somalia (AMISOM) as well as by the Sufi militia Ahlu Sunna wal Jamaa and tribal militias.Their offensive aims to stretch a Shebab, who have controlled most of southern and central Somalia for three years with a limited number of men but supported on the ground by jihadi fighters from around the world. Witnesses and officials said Ethiopia was trucking in troops to El Bur district, a key Shebab stronghold in central Somalia.“I saw dozens of trucks belonging to the Ethiopian military heading towards El Bur. It looks like they are joining Ahlu Sunna’s war against the Shebab,” said one local resident, Ise Maalim. A government official in Dolow district, further south, said the all-out offensive that had been promised by three successive prime ministers was finally under way.“The war to eliminate the Shebab threat from the country has begun, we will not stop until we succeed in our goal to cleanse this country of Al-Qaeda and their Somali followers,” Abdifatah Ibrahim Gesey told AFP.
The towns of Bulo Hawo and Luq, near the Kenyan border, were recently recaptured from the Shebab, who witnesses said were abandoning some of their positions in the south to regroup for the battle over Mogadishu.Bulo Hawo was conquered after a bloody battle which some security sources in the region said left at least 80 people dead, including women, but Luq was taken over without any fighting.Ethiopia and the Somali government have denied direct Ethiopian involvement in the fighting but residents in the affected areas were adamant.“The presence of Ethiopian troops in the battle is not a secret, they want to help us push away Shebab terrorists,” Bulo Hawo resident Mowliid Abdi said.According to officials and witnesses, pro-government forces have also deployed around Beledweyne, a strategic town near the Ethiopian border. (AFP) 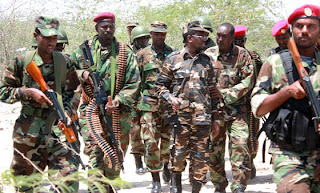 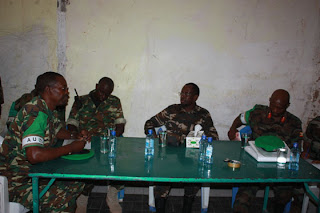 our own photographer went along with him. Somali  President visit to front-line troops (terror free somalia) 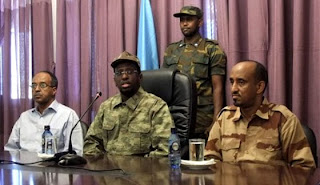 Somali president hails Somali people to help army
president of the transitional federal government of Somalia on Monday hailed the people of the nation to act quickly to help the national army, who are conducting operations to uproot Al shabaab from Somalia completely.Speaking at a press conference held in Mogadishu, the president Al shabaab are on brink of dismantling after abandoning several key towns in gedo region in south of the nation.Ahmed proclaimed that the country is in state different the previous, adding that the people are needed to take part efforts bringing peace back to the strife ridden Somalia.The president of Somalia reiterated that their military forces are heading towards the regions of bay and Bakool in an attempt to reclaim south and central Somalia from insurgents.

The transitional federal government of republic of Somalia on Tuesday called for neighboring nations to control tightly the security of their borders with Somalia.The state minister of sports and labor, Abdirashid Mohamoud Hidig has told the media in the capital Mogadishu that since Somali army started major operations hunting what he called Al shabaab militias, adjoining countries by Somalia should do more to secure their borders sharing with Somalia.Mr. Hidig stressed that Somali army made advances and reach triumph over the rebel group Al shabaab in recent Mogadishu and Somalia regions’ battles.He said the people of Somalia are needed to stand and assist the army to facilitate bringing peace back to strife-devastated Somalia.The statement of Somali government comes as Kenya announced it is strengthening its border security.
Posted by Siad barre at 5:59 PM