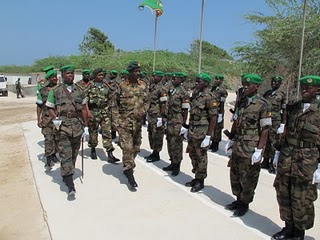 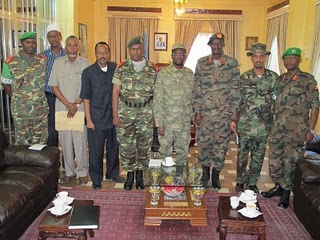 update onSomalia: Burundi and Uganda defence force chiefs visit Mogadishu and commit additional troops to Amisom
Major General Godefroid Niyombare and General Aronda Nyakairima, Chiefs of Defence Forces for Burundi and Uganda visited AMISOM force bases in Mogadishu, the restive capital of Somalia last week and declared in a joint statement that each country will deploy 2000 soldiers to take part of African Union Mission for Somalia.
"There is no peace to keep here, so each and every day our forces support the TFG to expand their control of Mogadishu. We are making steady but consistent progress and we now have 60% territorial control as a result of the recently implemented offensive and we will continue to build on this," they said in the statement.
United Nation mandated troops from African Union to Somalia on 2007 to assist the week Somali Transitional Federal Government to fight against Islamic militants who controls much of south and central Somalia regions including large parts of the capital.

"We have great confidence that other countries will join the mission but in the meantime it is our duty to support our Somali brothers. We must continue our work here and we will do so. The extremists cannot win. Their defeat cannot be immediate but it will ultimately come."
The statement says the troops were already heading for pre-deployment training. Burundi has already deployed one battalion."The solution here is not military alone. It is political and humanitarian also. There have been dramatic changes and improvements in the way Mogadishu is governed. Normal life is starting to return. We see street lights, cleaning, even rebuilding. All signs of a stabilising situation," the chiefs said in their joint statement.
They appealed to the government to continue to focus on their number one stakeholder - the Somali people and to keep faith with the progress being made.
"This is the beginning of the end of the anarchy and strife." the statement says
Somalia was without functioning government since 1991, when clan militias overthrew Siad Barre's administration.
Since 2007 deadly clashes in the Somalia between Somali government forces alongside African Union Troops and Al-Shabaab, Al-Qaeda linked militia left dead more than 21,000 civilians and forced 1.5 million to flee from their houses
Posted by Unknown at 9:23 PM