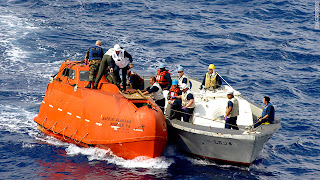 (CNN) -- Pirates targeted the Maersk Alabama, the ship seized in a dramatic operation in the Indian Ocean waters two years ago.Four suspected pirates approached the ship in a skiff and a hook ladder, the Maersk said in a statement Tuesday."The captain followed the appropriate protocol and authorized an embarked security team to fire warning shots in order for the pirates to turn away," the statement said.Shortly after, the boat took off and the ship was headed to the Kenyan coastal town of Mombasa.

The Maersk's hijacking in April 2009 led to a hostage standoff involving Capt. Richard Phillips.
Pirates captured the captain and held him for days in one of the ship's lifeboats.Navy snipers killed the captors and arrested one of the pirates, who was sentenced last month to more than 30 years in prison.


Esbern Snare given mandate for another three months of pirate huntingDenmark’s largest warship, Esbern Snare, will continue its hunt for pirates off the coast of Somalia for another three months, reports public broadcaster DR.Lene Espersen, the foreign minister, announced the news this morning after a meeting with the Parliamentary Foreign Policy Committee.”I have reason to believe there is a political majority for the extension,” Espersen said before she had to leave the meeting prematurely as she is hosting Palestinian president Mahmaoud Abbas, who is on a three-day visit to Denmark.Shortly after, Gitte Lillelund Bech, the defence minister, confirmed the decision. “We are seeing several Danish cargo ships being attacked by pirates, so the government has decided to extend.”Yesterday a Maersk ship was subjected to pirate attacks; however, armed guards on board the ship managed to fend off the pirates.“This is clearly a big problem. The foreign minister and I will now prepare a proposal for a combined Danish effort against the pirates,” said Bech.Esbern Snare is part of the international Operation Ocean Shield anti-piracy effort and was due to have ended its mission with the force on March 1.The warship’s journey home to Denmark was, however, temporarily postponed when a yacht with seven Danish passengers was hijacked by Somali pirates on February 24.This is not the first time that Esbern Snare has been told to prolong its mission. The vessel was to have returned to Denmark in December 2010, but was ordered to continue its mission until March 1  DV News