Somali PM: We shall decimate Al shabaab within 90 days 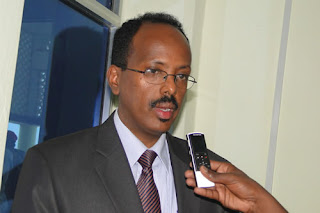 MOGADISHU (tf.sf) – Mohammed Abdullahi Mohammed better known as Farmajo, the prime minister of Somali transitional federal government on Sunday said that Somali army will decimate and crush Al shabaab fighters within 90 days.
In an interview with state-run Radio Mogadishu, Mohammed said that international community is looking closely to war-ridden Somalia, adding United Nations Security Council had agreed to tackle the protracted problems in the horn of Africa nation.
He said the international community acknowledged the need of sending extra AU forces to create a peaceful atmosphere in Somalia as Somali army is in battle against Al shabaab fighters who control large swathes in southern and central Somalia.
The premier also talked about the recent Somali transitional government forces’ developments against Al shabaab movement.
He lately called for Somali army to continue fighting and the success will be their side.
Posted by Unknown at 12:01 PM