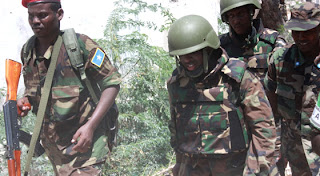 
Sheikh Sharif, president of Somalis transitional federal government paid a short visit to the warring zones in Hodan and H/wadag districts on foot giving morale to Somali national forces in the frontlines fighting with Shabab fighters and urged soldiers to go ahead their operations.
Sheikh Sharif said,” I urge you to continue fighting with Shabab until you force them to quit from the capital,”
The interim president also congratulated on Somali national forces on their consecutive victories gained from southern parts of the country and inside the capital.
This is the second time Somali president, Sharif visits frontlines in less than a month and the other visit was when the African union peacekeeping forces allied with T.F.G forces captured military bases from Shabab late February last month.
Posted by Unknown at 8:46 AM