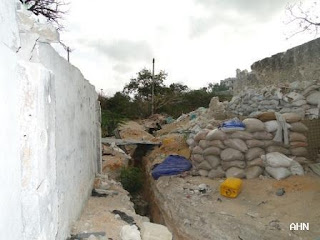 Mogadishu, Somalia (AHN) – The transitional federal government of Somalia on Saturday proclaimed the market of Bakaara is a military base for al Qaeda\’s surrogate in the horn of Africa nation.
Somalia\’s deputy minister of sports and labor, Abdirashid Mohammed Hidig noted that Somali forces backed by African Union peacekeepers known as (AMISOM) are not behind the closure of Bakaara, Mogadishu\’s largest and most popular market.
All the activities of the market were on hold in the last few weeks after Somali government forces confiscated key al Shabaab military bases near Bakaara.
\”The reason of Bakaara market closure is that al Shabaab hard-line group is using the market as a military position from where they launch attacks\” Hidig was quoted as saying.
He demanded al Shabaab leave from Bakaara, accusing them that they want to make military bases in residential areas in an attempt to use the civilians as human-shield.
n official admitted crushing al Shabaab is not easy, saying that they dug large areas in Mogadishu making them huge military trenches.
He said that some in the government believe they should call for world nations to help Somali by using war-planes to commence an aerial assault on al Shabaab military positions along the coast.
Late last month, the Somali government kicked off huge military operations against the extremist group in Mogadishu and many parts of southern and central Somalia forcing Shabaab to lose key military positions in Mogadishu and the key border town of Belet-Hawo in southern Somalia.