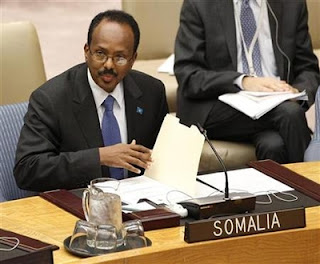 Somalia needs more equipment and other resources from the U.S., not more troops, Prime Minister Mohamed Abdullahi Mohamed said. “We would like to see more resources, more equipment to the TFG forces,” Mohamed said, referring to Somalia’s transitional federal government in an interview scheduled for broadcast today on CNN’s “Fareed Zakaria GPS” program. “We have enough forces.” The United Nations Security Council on March 10 urged the international community to fund troops, helicopters and logistical support for the African Union peacekeeping force in Somalia, which has been fighting Islamic rebels. The government led by Sheikh Sharif Sheikh Ahmed is fighting insurgents including the al-Shabaab movement, which the U.S. accuses of having links to the al-Qaeda terrorist network. Somalia has been without a functioning central administration since 1991, when ruler Mohamed Siad Barre was ousted.
“We are winning and, of course, we cannot do it alone,” Mohamed told CNN in the interview, taped March 11. “We need international collaboration and cooperation, particularly the United States and the European countries,” as well as Arab nations, he said. Mohamed, on March 10, told the UN Security Council that al- Shabaab forces may team with pirates off the coast of Somalia to use fuel tankers as weapons like terrorists did with commercial airliners on Sept. 11 in the U.S. “We are fighting a two-front war, which is piracy and extremism and terrorism,” Mohamed said in the CNN interview.  bloomberg.net
Posted by Unknown at 7:19 PM