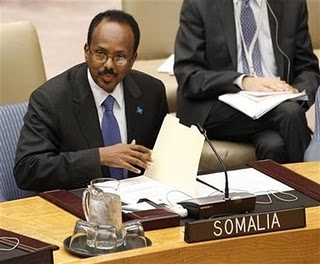 Somalia's Prime Minister, Mohammed Abdullahi Mohammed announced yesterday that he has been promised United Nations support in his government's ongoing battle with terrorist group Al Shabaab and the marauding Somali pirates.On Friday, the United Nations Security Council held a meeting regarding Somalia, its interim federal government, and the fledgling nation's problem with radical Islamist terrorists and murdering pirates terrorizing the waters off the coast of North Africa.Security Council members displayed enthusiasm for the recently initiated anti-Al Shabaab operations led by the Somali army and backed by African Union peacekeepers in Mogadishu. The offensive caused the Muslim organization to lose some of its terrorist camps surrounding Somalia's capital, Mohammed stated.
A U.S. intelligence source told the Public Safety Examiner that U.N. Security Council members, including the United States, on Friday agreed to support the transitional government in its efforts to combat al Qaeda’s surrogate Al Shabaab and the perpetrators of piracy.The Security Council's Somalia meeting at the United Nations occurred in the wake of a federal grand jury indicting 13 Somalis and one Yemeni for pirating a yacht and taking four U.S. citizens hostage. The abducted Americans were ultimately killed before their release could be secured by the U.S.Navy.
"This is a horrific crime, involving the armed hijacking of an American ship and the slaughter of American citizens," said U.S. Attorney Neil MacBride. "The alleged pirates will now face justice in an American courtroom."The indictment was returned on March 8, 2011, and remained sealed until the defendants made their initial appearances before a judge in Norfolk, Virginia, last week.According to the three-count indictment, 14 alleged pirates boarded an American sailing vessel named the Quest on February 18, 2011, and held four U.S. citizens -- Scott and Jean Adams of California and Phyllis Mackay and Bob Riggle of Washington state -- hostage for five days.The U.S. military negotiated with the alleged pirates to attempt to free the hostages. As the military continued its negotiations, at least one of the alleged pirates on board the Quest fired a rocket-propelled grenade at a U.S. Navy ship, the USS Sterett. That same day -- without provocation -- at least three of the men on the Quest allegedly shot and killed the four hostages execution-style before their release could be secured.
Following the shooting of the hostages, the Somalis on the high seas were taken into custody by the U.S. military. The indictment states that the alleged pirates possessed a rocket-propelled grenade launcher and several AK-47 assault rifles and that the defendants threw overboard additional weapons prior to being taken into custody.All 14 men were charged with piracy, which carries a mandatory penalty of life in prison. In addition, the indictment also charges them with conspiracy to commit kidnapping, which carries a maximum penalty of life in prison, and the use of a destructive device during a crime of violence. The latter charge carries a mandatory minimum of 30 years in prison and a maximum of life in prison, which would run consecutive to all other charges.Somalia's Prime Minister warned that the terrorists in his country may join the pirates and attack oil tankers, cruise ships, and yachts or commit evil actions, such as what happened on 9/11 in the United States. The FBI and other law enforcement agencies have arrested members and associates of Al Shabaab operating within the U.S. mainland. via : Jim Kouri, Public Safety Examiner
Posted by Unknown at 2:45 PM