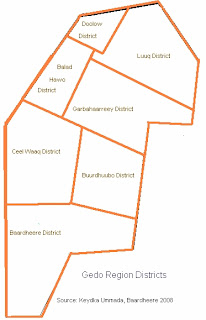 Forces of Somali transitional federal government has on Tuesday morning seized El-Wak district of Gedo region as Shabab militias emptied it yesterday, reports said.Government soldiers who reached El-waq district were about 1000 soldiers trained in Siyelow camp in Kenya as reports from Gedo region indicate.Officials of those soldiers told people in the city to get calm and promised that Somali government will name administration to that district.The district is part of a lot of districts and villages that Shabab forces have withdrawn without fighting with T.F.G soldiers and its supporters.Officials of Somali transitional federal government on Tuesday said they are heading towards the town of Bardhere in Gedo region in southern Somalia, where Al shabaab is based.Mohammed Abdi Kalilbare with bare adan shire is the commanded Somali government forces in Gedo
Somalia’s governor for Gedo region said in an interview with  a local radio station based in Mogadishu that Somali forces are committed to take control of the entirety of Gedo region.
Kalil went on to say that they confiscated the towns of Belet-hawo and Luq, spelling out that they are going to attack Bardhere town.He also shed a light on two civilian people killed by Somali soldiers in Luq, saying that the one of killed men was previously a soldier of TFG and later defected joining to Al shabaab. He vowed they will kill any one like that.