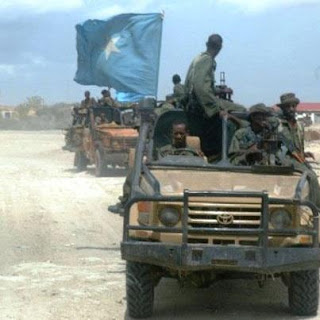 With the recent loss of two key transit points, al Qaida’s Somali affiliate, for the first time in years, is facing what military analysts say is the likely end of the group’s once-powerful rule over much of Somalia
The future of al Shabab, as the al Qaida affiliate is known, is still difficult to predict, but military analysts say its hold on Kismayo, the port city through which its supplies move and from which it derives much of its financing, is threatened and that the fall of the other transit points has cut off key al Shabab supply routes to its western and northern fronts.“The clock is ticking," said a well-informed regional security consultant who’s long tracked the battle against al Shabab and who asked that he not be identified because of the sensitivity of the topic. "They cut off Shabab from their supply routes. It’s a big deal for the organization as a whole."
The most recent blow came Thursday, when Kenyan and allied Somali forces captured the strategic crossroads of Afmadow, about 60 miles north of Kismayo. That followed the al Shabab defeat last week at Afgooye, which fell to African Union troops from Ugandan and Burundian pushing west from Somalia’s battered capital, Mogadishu.Al Shabab once controlled nearly all of southern and central Somalia, but that territory has dwindled steadily in the past year. African Union forces pushed al Shabab out of Mogadishu last August, then Kenya launched a surprise invasion from the west in October. Ethiopian troops soon followed, pushing south across their own border with Somalia.Kenya has long indicated that its end objective is to push al Shabab out of Kismayo, the southern port city that’s al Shabab’s most lucrative and important possession. Military strategists say there’s no way to take the city without first capturing Afmadow, a town of 50,000."It’s a commercial hub for almost the entire region," said Abdiwahab Sheikh Abdisamed, a lecturer at the University of Nairobi and a Somali analyst. With it now under Kenyan control, al Shabab’s hold is crumbling, he said."Basically, the entire al Shabab-controlled area is under siege," Abdisamed said. "If you combine all those forces, the days of al Shabab are numbered."When the end might arrive, however, is unclear. Multiple sources said al Shabab had abandoned Afmadow without a fight and had set up a new defensive position halfway on the road between Afmadow and Kismayo at a place called Birta Dheer.Kenya has been bombarding Kismayo from the sea, but a spokesman for a Somali militia that’s allied with Kenyan forces said any ground assault would wait till Afmadow was secure and it had become clearer how al Shabab planned to defend the city."We don’t have any plans of moving to Kismayo that fast," said Abdinasir Serar, a spokesman for the Ras Kamboni movement, one of the Somali militias that are fighting alongside Kenyan troops. "For now we will settle in Afmadow."What happens if al Shabab loses Kismayo is also unclear. Analysts foresee a dizzying array of competing interests that include Somalia’s many clans and sub-clans, the politics of the neighboring countries whose troops are now inside Somalia and the often self-serving interests of the country’s political elite, now ensconced in Mogadishu.Kenya, Ethiopia, Uganda and Burundi all have their own national interests in Somalia, and their own Somali allies. While Uganda and Burundi have been protecting the internationally recognized but flimsy transitional government in Mogadishu, Kenya has been training Somali troops and building ties with Ras Kamboni, while Ethiopia has backed a local Sufi militia that’s at odds with al Shabab’s ultra-conservative interpretation of Islam.With steady military advances, each foreign power is carving out its own regions of influence, and there seems to be no coherent plan for how to unify all these regions under a central government in Mogadishu should the threat from al Shabab fade.As for al Shabab itself, the group has proved quick to evolve in the past, and it could return once again to a more traditional guerrilla insurgency of shadowy rural movements and hit-and-run attacks.Al Shabab’s rise to power occurred during Ethiopia’s previous invasion of the country. If Somalis once again find themselves under the thumb of their foreign neighbors, al Shabab may be able to reinvent itself again.