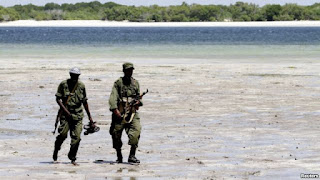 
NAIROBI - A spokesman for a militia aligned with Somalia's Transitional Federal Government says troops are moving closer to al-Shabab's principal remaining stronghold of Kismayo. The pro-government militia Ras Kamboni says the militant Islamist group is trying to rally civilians inside the port city to defend against the oncoming attack. The long-stalled offensive in southern Somalia, aimed at seizing control of Somalia’s third city Kismayo from al-Shabab, has gained momentum as African Union troops, Somali government forces and allied militias take more ground.Abdinasir Serar of Ras Kamboni says the final push to Kismayo is expected to start in the coming weeks. He says that push will come on multiple fronts.Our forces are 75 kilometers away from Kismayo, Serar says. We are planning to enter Kismayo through the seaport and several other towns -- Bula Haji and Jilib, for example -- and also want to come through all these directions to capture Kismayo.African Union forces say they have captured the town of Bibi, which is 75 kilometers from Kismayo and 45 kilometers from Afmadow, another town that pro-government forces recently captured from al-Shabab.There is growing concern for the safety of Kismayo's tens of thousands of residents as the final military push approaches.Serar says Ras Kamboni is monitoring the situation inside Kismayo very closely, and received an intelligence report that al-Shabab met with local clan elders to encourage them to fight.Serar says the reports they are getting from Kismayo is that al-Shabab met with clan elders and told them to take weapons and fight against what they call non-believers. He says al-Shabab is likely not to put up a fight and may pull out of the port city.However, multiple sources say that al-Shabab had set up a new defensive position in a place called Birta Dheer, midway on the road between Afmadow and Kismayo.Birta Dheer is the main strategic position for the militants, and if that position is taken it may be difficult for al-Shabab to defend the port city of Kismayo. Via VOA
Posted by Siad barre at 3:12 PM