Over 500 Somali soldiers were on Tuesday passed out at a Military training camp on the outskirt of Beledweyne town near the Ethiopian border.The pass out ceremony was attended by the area provincial administration and Ethiopian officials in the area.The trainees are expected to join the Somalia Transitional Federal Government forces tasked with the role of exerting government authority on the entire country, according to the area deputy security boss, Ahmed Abdalle Osman.The soldiers have undergone close to a month long special military trainings and will be part of the forces battling Al-Shabaab militant group.TFG officials who attended the pass out ceremony urged the trainees to be responsible and uphold the country’s rule of law as they work towards restoration of the long awaited peace into Somalia and drive away the rebel group out of the country.This is the second lot the government is getting in a month time.On May 13, a total of 1000 TFG and Ahlu Sunna soldiers were passed out at a Military training camp on the outskirt of Dolow town on the Ethiopian side of the border.

Kenya seeking US aid for attack on Al-Shabaab town 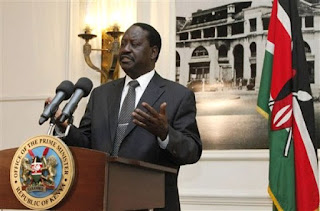 Kenya wants America and Europe to help it attack a militant port town in southern Somalia.Prime Minister
Raila Odinga said Tuesday that Kenyan forces are preparing for a “final onslaught” on the Somali port town of Kismayo by August, when the U.N. mandate of Somalia’s transitional government expires. Kismayo is controlled by Al-Shabaab militants who get funds by levying “taxes” on the port.
Kenyan forces moved into Somalia in October and have been moving toward Kismayo.Odinga said Kenya has asked the U.S. for financial assistance in the operation. He said the U.S. previously “resisted” providing funds until Kenyan forces joined the African Union force known as AMISOM. That happened earlier this month.Kenya's Raila Odinga wants EU to attack Somalia's al-Shabab Islamists