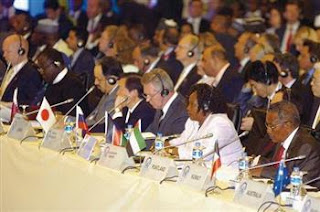 The Second Istanbul Conference on Somalia, under the theme “Preparing Somalia’s Future: Goals for 2015,” took place on 31st May and 1st June 2012. Maintaining the multi-dimensional and multi-layered approach of the first Istanbul Conference in 2010 on Somalia, it was attended by high level representatives from 57 countries and 11 international and regional organizations, as well as by the TFG leadership, the regional administrations, and representatives from wide-ranging segments of Somali society, including youth, women, business community, elders, religious leaders and the Diaspora.
Introduction
Political
10.  The Conference reiterated the crucial need for the international community to support dialogue that Somaliland and the TFG have agreed to pursue.
11.  The Participants looked forward to the beginning of a new political dispensation, with a new Parliament and Government, and emphasized the importance of those institutions coming to fruition through a more representative, transparent and legitimate process.
12.  In keeping with the London Communique, the Conference reiterated that respect for human rights must be at the heart of the peace process. It welcomed the Memorandum of Understanding signed between the Transitional Federal Government and the United Nations on 11 May 2012, and called on the Somali authorities to follow through with their commitment to uphold human rights and the rule of law, and put an end to the culture of violence and impunity, and bring about accountability. The Conference called for all parties to commit themselves to transitional justice mechanisms in the Post-Transition period.
13.  The Conference emphasized that in the post-Transition period, the new political dispensation in Somalia must begin with a new program aimed at re-establishing of state and local institutions and administrative structures, based on and complementary to the current Roadmap including the newly recovered areas.