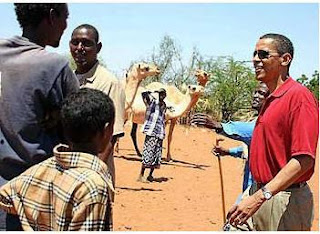 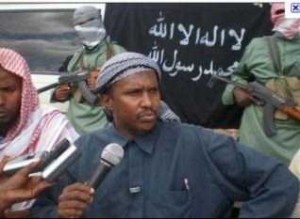 
$7 million for information on Ahmed Abdi aw-Mohamed, the group's founder and overall commander.


The United States offers millions for information leading to the capture of the world's most wanted terrorists.A Somali militant group has purportedly countered with an offer of camels for U.S. officials.Al-Shabaab has placed a bounty of 10 camels for President Barack Obama and two camels for information on Secretary of State Hillary Clinton.An audio statement posted on jihadist websites purportedly from Al-Shabaab jeered news that the United States is offering millions of dollars for information on seven key members of al-Shabaab through its Rewards for Justice program.The man on the audio claimed to be Fuad Mohamed Khalaf, considered by the State Department to be Al-Shabaab's leading fundraiser. The United States has offered $5 million for information of his whereabouts."Whoever brings the mujahidin information about the whereabouts of infidel Obama and the lady of Bill Clinton, the woman named Hillary Clinton, I will give a reward," the man said.A study by Galkayo University, which looked at the effects of drought on livestock, said the average cost of a camel in Somalia is $700.CNN can not independently verify the authenticity of the audio recording, which was purportedly made by Khalaf during a speech to followers in the southern port city of Merca.The U.S. State Department's Rewards for Justice program is offering $7 million for information on the location of Ahmed Abdi Aw-Mohamed, the founder of the Islamist group in Somalia.This year, he and al Qaeda's leader, Ayman al-Zawahiri, released a joint video formally announcing a merger between the terror groups.In announcing the bounties on Mohamed and his key associates Thursday, the State Department called al-Shabaab "a threat to the stability of East Africa and to the national security interests of the United States."The State Department said it is also offering up to $5 million each for information leading to the location of four of Aw-Mohamed's associates, including Khalaf. In addition, it is offering up to $3 million each for two of the terror group's other leaders.   Via CNN 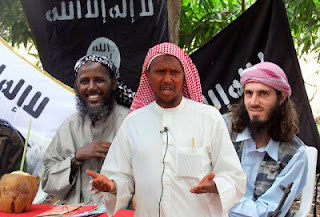 You Know What i  Hate all types of terrorist.   everyone in the media   manages to miss the point entirely .. ...The funny thing about this story is..about form of discrimination and oppression against woman in islam . considering me as Patriotic American immigrants from Somalia, and  lived  her  most of my adult life , I did some research and found out.. Somali Clan leaders are known in Somalia as 'Ugas', 'Sultan', 'Garaad', ...or any Leadership position Society roles..According to Somali customary law..compensation, actual price paid is 100 camels..The Somalia-based Islamist terrorist group Al-Shabaab  basically suggesting that  .. he's less than a man.   The media did not   pick up the important part  of the "story,"    i repeatedly suggested that Obama is weak on terror.  "Just wanted to let you folks know   The price is not right. I think shabaab  should be carpet bombed into the stone age ,for Disrespecting Our President Obama