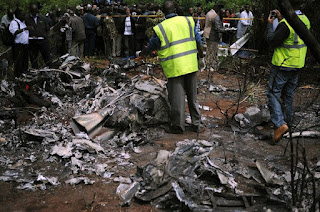 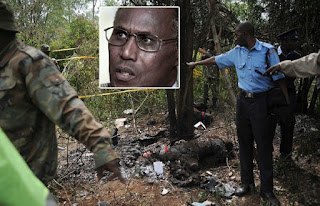 The architect of Kenya's military campaign in Somalia and a leading presidential candidate for next year's election has died in a helicopter crash in the hills outside the capital, Nairobi.The Internal Security Minister, George Saitoti, and at least five of his colleagues died when the police helicopter they were travelling in crashed on the outskirts of the city. Authorities are investigating the cause of the crash, which comes at a time when Kenya is on high alert for terrorist attacks. "As we speak now, nobody knows the cause of the accident," the Prime Minister Raila Odinga said yesterday.Mr Saitoti pushed for Kenya's intervention last year in neighbouring Somalia. Since then, there has been a spate of grenade attacks blamed by police on supporters of the Somali militant group al-Shabaab. One person was killed and dozens were injured last month in a firebomb attack on a Nairobi shopping centre that has been linked to al-Shabaab. The Islamist group has threatened an attack against a major Kenyan target in the coming month.Mr Saitoti, 66, was one of the country's most prominent politicians, a veteran of the authoritarian government of Daniel Arap Moi. Mr Saitoti had been Vice-President and held several ministries.He was implicated in the country's largest corruption scandal, the Goldenberg affair, in which billions of dollars of public money were stolen as part of a gold export scheme.After a period of political exile he returned to the cabinet under the current President Mwai Kibaki, whose administration was revealed by its own anti-corruption tsar, John Githongo, to be involved in similar grand corruption schemes.An unusual figure in senior Kenyan politics, Mr Saitoti had a mixed background from the Masai and Kikuyu tribes. His sudden death nine months before a crucial election in East Africa's biggest economy may force a reorganisation of alliances in a campaign set to be dominated by the rivalry of Mr Odinga and the former Finance Minister Uhuru Kenyatta, the son of Jomo Kenyatta, Kenya's first president.Via  independent
Anti-Shabaab Kenyan minister killed in air crash