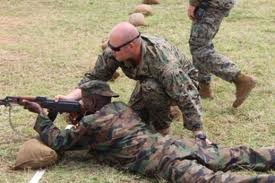 Uganda's efforts to counter-terror attacks have received a major boost with a donation of modern counter-terrorism (CT) equipment to the police by the U.S. government.Although most of the items remained concealed Thursday during the formal hand over at Police Counter Terrorism (CT) head office for fear of arming "our enemies" both the police and US Embassy officials described the equipment as "modern and very good."Part of the equipment included masks and armoured geared for dealing with bio-terrorism.After receiving the equipment from the US Embassy Regional Security Officer, Tanner Brian, deputy police boss Okoth Ochola declared: "We now have the capacity to precisely deal with terrorists."Ochola noted that terrorism remained a major challenge globally.

"The most worrying global crime at the moment is terrorism," he said and appealed to the CT boss John Ndugutse and his team not to let Uganda police down by failing to utilize the equipment.The donation comes at a time when the police has issued a terror alert and is hunting for suspected top al-Shabaab suspects with links to the al-Qaeda believed to be in the country.Security agencies last week launched a hunt for three terror suspects -Martin Muller a.k.a. Ahmed Khaled Andreas, EmrahErdogan Alias Imraan al-Kurdy a.k.a. Salahaddin al-Kurdy and another believed to have sneaked into the country.

International Police (Interpol) has since joined efforts to hunt to for the suspects and the U.S. Thursday announcing a rewards of up to US$7m (about sh17.3b) for information leading to the location of seven key leaders of Somalia's al- Shabaab, seeking for the first time to target top echelons of the al-Qaeda-linked militant group. 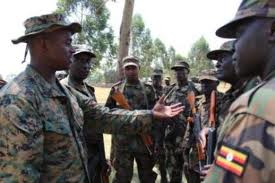 U.S. officials said the rewards opened a new front in the battle against the al-Shabaab and signaled Washington's determination to press the fight against terrorism across Africa.
The U.S. government in 2008 named the al-Shabaab to its list of foreign terrorist organizations, imposing financial and other restrictions on the group that had seized control of large areas of south and central Somalia and sought to impose its strict version of Islam on the impoverished Horn of Africa nation.