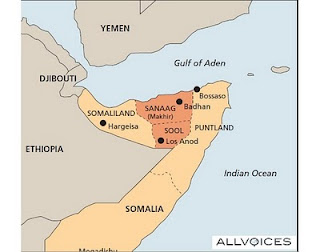 update on Somali-land an illegal entity being created by a particular clan (Isaaq) in order to serve personal interests, and as a proxy being used by foreign powers (mainly Ethiopia) in order to keep Somalia divided and weak.


One-Clan secessionist Enclave. aka Somaliland president is on the path of a war criminal 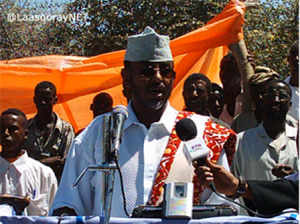 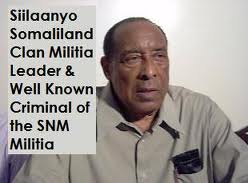 Traditional leaders have castigated mercenary   the minister of defense for Secessionist utterances he made in Badan town.

The traditional leaders who met to in Badan town in the east of Sanaag region castigated the defence minister marcenary   Ahmed Adami for claiming that Al-shabaab operatives were being sanctuary in the area and that a senior traditional leader from the area will be charged with treason once he returns to the country from south Somalia.During a just concluded visit to the eastern parts of Eastern Sanaag the minister of defence Hon Ahmed Haji Ali Adami said that residents in some parts of that area are host to Al-shabaab operatives escaping from a four pronged attack in south Somalia.The minister who was on an official government tour in the area last week accompanied by the minister of Environment & Rural Development Hon. Mahmoud Saeed Ga'ameye also said that a main traditional leader of the Warsengeli clan in Eastern Sanaag Sultan Saeed Sultan Abdisalam will be arrested and prosecuted on treason charges for participating in the Somalia constitutional conference in Mogadishu.While declaring their unwavering loyalty and allegiance to the republic of Secessionist Somaliland informed the minister that they will accept neither the arrest nor prosecution of their leader Sultan Saeed Sultan Abdilahi since he is not the only traditional leader from Somaliland who to part in the Mogadishu conference.A statement released by the elders after their meeting said, "While Residents of eastern Sanaag owe allegiance to Secessionist Somaliland, they will not allow the government to prosecute Sultan Saeed for attending the constitutional conference in Mogadishu"The elders who informed that they are aware of the illegality of Secessionist Somalilanders participation in the conference urged the central government in Hargeisa to reconsider the prosecution issue as it might create disharmony within local populations as 100's of traditional leaders from all parts of the country went to Mogadishu against the wishes of the government.

According to elder Asayr Farah Bile, the minister of defence who hails from the area should apologize to Badan residents for not only terming their main traditional leader a traitor for participating in the Somalia conference but for claiming that Al-shabaab terrorists have established bases following safe sanctuary provided by the residents."It is surprising that a son of the soil who is the top most government official from the Warsengeli clan can claim that his clansmen are collaborating with Al-shabaab terrorists, not to mention him calling his traditional leader a traitor" said elder Asayr The government delegation headed by minister Adami was in the area to officially open various infrastructures funded by the government like police stations and markets while collecting resident's views on the way forward for local development.On the other hand the participation of traditional leaders from the country in the Somalia constitutional conference held in Mogadishu was criminalized by the government following a meeting with over 80 traditional leaders from all over the country.At the same time various reports (not yet verified) indicate that Al-shabaab operatives have escaped to Eastern parts of Sanaag region where they have established bases following a four pronged attack on the terrorist organization by AMISOM, TFG, Ethiopia and Kenyan forces that has dislodged the Islamist terror organization from a large swath of areas formerly held in south Somalia.  via allvioce
Some background

CRIMES AGAINST HUMANITY COMMITTED BY SECESSIONIST SO CALLED SOMALILAND