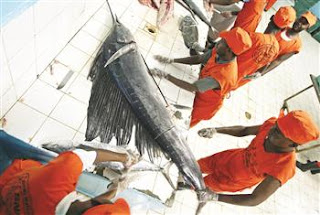 Many Somali people do not eat fish but the commodity is one of the main items of exports in the country. AA photo


Turkey’s trade efforts for defense equipment appear to be taking an unfamiliar turn: bartering with fish.For a generation, Somalia has been a byword for the sufferings of a failed state. It has lurched from disaster to disaster over the last 20 years since the central government was toppled by clan militias that later turned on each other. Year after year, Somalia has been ranked as one of the world’s poorest, most violent countries, plagued by warring militias, bandits, warlords and pirates. Now the fledgling Somali government wants to buy a coast guard boat from Turkey to boost it assets against the country’s pirates. But there is one problem: how to afford the more than $10 million, the cost of the coast guard patrol boat.Turkey’s procurement office, the Undersecretariat for Defense Industries (SSM), has come up with an ingenious, payment system: payment with fish.Somalia, situated on the coast of the Indian Ocean, catches some of the world’s most delicious fish. Many Somali groups, however, abstain from eating fish. Under the SSM plan, the Somalis will be able to catch fish to raise the money needed for the coast guard ship.“We have reached a full agreement for Somali fish for our coast guard ship. This is a win-win situation for everybody involved,” one procurement official told the Hürriyet Daily News.Turkey produces many different kinds of coast guard ships to meet the needs of the Somali forces.Since 2006, the country has faced an insurgency led by al-Shabaab, one of Africa’s most fearsome militant Islamist groups. Al-Shabaab controls parts of southern Somalia and has claimed affiliation with al-Qaeda since 2007.Many kidnappings have been conducted by pirates, who operate with total impunity in many parts of Somalia. “There are many African countries that are willing to do arms deals with Turkey, but do not have the money. We should be creative enough to find such payment methods,” the procurement official said.However, Turkish foreign ministry sources said they were unaware of such a move adding that a defense industry deal with the civil unrest-hit nation required a U.N. Security Council approval.
Posted by Unknown at 7:09 PM