Somalia: Terrorism Is a Symptom of State Failure 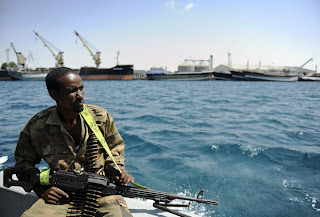 The African Union’s mission to Somalia (AMISOM) is having marginal success in pushing the terrorist organization al-Shabaab out of its occupied territory.

Al-Shabaab militants have retreated from strongholds in Baidoa, Afmadow, Afgoye, and the crucial port city of Kismayo. African military leaders are confident that their thankless task of defending the failed state is finally paying off. Nevertheless, until Somalia’s political situation is resolved, any initial success that AMISOM has will be unsustainable.

Terrorism is not the cause of Somalia’s chaos. It is a symptom of the lack of governance that has plagued the country for over two decades. Without a government committed to enforcing the rule of law and defending its population against malevolent forces, illegal militias, criminal groups, and terrorism will thrive.

Since the regime of General Siyad Barre was overthrown in 1991, Somalia has shifted in and out of 14 transitional governments. The current Transitional Federal Government (TFG)—infamous for its corruption, cronyism, and complete uselessness in addressing the needs of Somalis—is set to hold presidential and parliamentary elections by August 20. Yet every indication points to the creation of a new government that mirrors the current body.

Somalia’s elections are neither democratic nor likely to yield results that will bring about positive change. Rather than hold elections whereby every Somali casts a ballot, Somali politicians and the United Nations have agreed that 135 tribal elders will control the process. According to the Roadmap for the End of Transition in Somalia, selected elders will elect 825 delegates to the National Constituent Assembly no later than today, June 20. This deadline has not been met. The National Constituent Assembly will then elect members of parliament, which will then elect the president. This process has already caused controversy as accusations of bribery, corruption, and intimidation against tribal elders are rampant.

From the U.S. perspective, Secretary of State Hillary Clinton stated in February at the London Conference on Somalia that the international community will not support the extension of the TFG beyond its mandate. Clinton also threatened to levy sanctions on individuals that obstruct the process, including on those within the TFG.

Yet, considering the undemocratic nature of the elections and delays, though expected, prospects for the transition to meaningful governance are grim. As the U.S. is one of the largest donors to AMISOM, it’s encouraging to see al-Shabaab’s retreat. However, good governance, rather than military might, will be the long-term key to alleviating the crisis.

For more information, see The Heritage Foundation’s Backgrounder “Saving Somalia: The Next Steps for the Obama Administration.”  Via  Protect America