One dead in blast at Mombasa bar 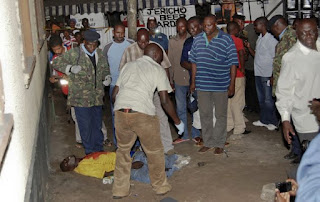 person has died in an explosion at a bar (live pic)

At least one person has died in an explosion at a bar in the Kenyan city of Mombasa, police sources say.
Initial reports said several others had been injured.The blast comes a day after the US embassy had warned that there was an “imminent threat” of a terrorist attack in the area.Earlier this week, Kenyan police had arrested two Iranian nationals over suspected links to a network planning attacks in Mombasa.Police also said they had recovered suspected bomb-making material in the capital, Nairobi, on Saturday.The explosion happened at around 22:00 local time (19:00 GMT), a police source told the AFP news agency.The bar was busy with people watching the quarter-final match between England and Italy in the Euro 2012 football tournament, witnesses said.Along with the US, France’s embassy in Nairobi had also warned its citizens to be “extremely vigilant” in the area.US officials had also been told to avoid the area until 1 July.In May one person died after explosive devices were thrown into a nightclub in Mombasa.Kenya has seen a number of grenade attacks since sending troops into Somalia last year to fight the Islamist Al-Shabaab militia.Earlier this year, the African Union force backing Somalia’s interim government was boosted from 12,000 troops to nearly 18,000 to incorporate the Kenyan troops.
Source: BBC
Posted by Siad barre at 4:37 AM