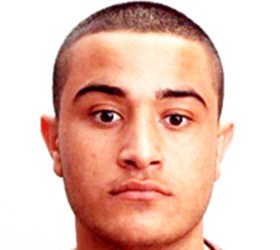 Ugandan police are holding a man suspected to be behind Nairobi’s Moi Avenue blast that claimed one life and injured more than  30 people.According to Uganda media reports, the suspect identified as Hussein was arrested on Sunday evening.It also emerged that Kenya police has sought help from Ugandan authorities to arrested wanted terror suspects on the run.The suspects are Ahmed Khaled Andreas Martin Muller and Emrah Erdogan alias Imraan Al-Kurdy alias Salahaddin Al-Kurdy.Ugandan police circulated the pictures of the two at the weekend and urged locals to help them apprehend the suspects.Whereas Muller is of German nationality Al-Kurdy, 24 is a German of Turkish origin.Both are on the international wanted list.It is suspected that Muller could be travelling with his 33 year old wife, Kriya Mohamed Hafos Adem, a Somali national born in Eritrea and their six year old daughter, Nusibra Hadiyah Muller.Ugandan police released the pictures of the foreign fighters of the International terror group Al-Qeada but reinforcing the Somalia based Al Shabaab outfit weeks after police in Nairobi released the same. One of Uganda’s newspaper, New Vision, said local police were hunting down three suspected terrorists and that one suspect whose identity was not disclosed reportedly sneaked into the country earlier on board a bus from Kenya.Terrorists who bombed Kampala in 2010 killing 74 in the twin blasts came from Kenya.Police spokesman Eric Kiraithe said they are working with their Ugandan counterparts and others in taming crime.