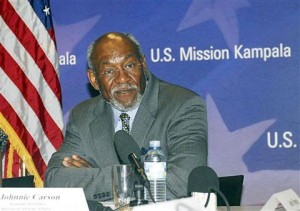 The U.S Assistant Secretary of State for African Affairs Johnnie Carson on Sunday visited the Somali capital, Mogadishu.During his arrival at the Mogadishu airport, Carson was welcomed by top government officials where they held talks with the.Although details of what they discussed still remain scanty, sources close to the meeting confirmed that the work plan of the road map and the recent military achievement by the Somali government dominated the talks.Carson’s unannounced visit to Mogadishu is said to be the first of its kind since he assumed office.

US to act firmly on 'spoiler' Somalis 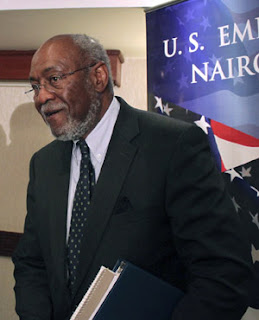 The United States will impose travel sanctions and freeze assets of Somalis who hinder a political roadmap towards a new constitution and president in the Horn-of-Africa nation, a senior State Department official said on Sunday.

Somalia faces an August deadline to achieve both targets, which are a key step towards restoring stability after more than two decades of turmoil following the overthrow of Honourable Mohamed Siad Barre.US Assistant Secretary of State for African affairs Johnnie Carson told a news conference in the Kenyan capital that the sanctions would apply to members of the Transitional Federal Government as well as to people outside of it."The kind of action we must take against spoilers range from visa sanctions to travel sanctions to asset freezes. There is a level of vulnerability for all of those who might be spoilers," he said after a one-day visit to Mogadishu.During the trip, which was the first by a senior ranking US official in nearly two decades, Carson met President Sheikh Sharif Ahmed, the prime minister and the ministers of defence and foreign affairs.He joined a growing chorus of optimism on the country, after African Union forces (AMISOM) engaged in hard battles with the militant group al-Shabaab and were able to restore a measure of normality in the capital Mogadishu.Asked if his visit was a precursor to Washington re-opening its embassy in Mogadishu, Carson said the United States would continue to monitor the progress being made before making a decision."When we believe that it is both appropriate and safe, we will consider stationing officials there," he said.A number of countries, including Turkey, have put up permanent or semi-permanent diplomatic missions in the Somali capital over the last year.Carson declined to comment on an offer of 10 camels by al-Shabaab for information on the whereabouts of President Barack Obama and of several chickens for the same information on Secretary of State Hillary Clinton, dismissing a reporter's question on it as "absurd".Fuad Muhammad Khalaf of the Shabaab group made the offer after Friday prayers, according to the SITE Intelligence Group, which monitors militant organisations, mocking the millions of dollars the United States has offered for leaders of the organisation.
- Reuters
Posted by Siad barre at 6:38 PM