Mogadishu, Thursday, June 21,2012 – The acting Prime Minister of Somalia and Minister of defenCe, Hussein Arab Isse displayed Buruno and David, two South African couples who were held captives by terrorist groups for more than a year.

Arab Issa said the two were rescued in an operation carried out by the military and security agencies in an early morning raid which resulted in their release. Minister for defence stated that the Somali National Army (SNM) have the capability to carry out effective and coordinated military rescue operations.

Mr. Arab Issa thanked the Minister of foreign affairs of Somalia Abdullahi Haji who was involved in the arbitration between the government of Somalia and South Africa the release of the two hostages.

The two South African couples will be flown home from the Aden Ade International Airport in Mogadishu. Arab Isse stated the Somali government’s dedication and commitment to fight terrorists.

Minister of foreign affairs expressed his happiness in the successful operation of the Somali National Army in which the two South African natives were freed and pledged that the SNA will rescue other captives.

“We are happy that we have been rescued by the government of Somalia. We owe them our lives. We have been in the hands of the terrorist for almost two years”, David said in an address to the media. 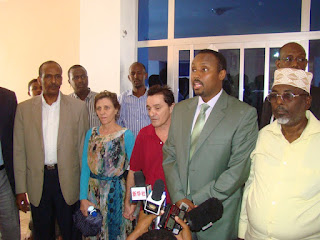