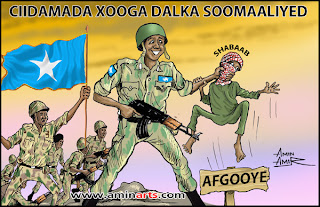 Senior Kenya Defence Force officers are concerned al Shabaab terrorists are escaping into Kenya as the operation to rout the insurgents from Somalia gains momentum. Intelligence reports indicate the al Qaeda-linked insurgents have been seen heading to Dadaab refugee camp and towards Kiunga, Kiwayu and Lamu islands. "They are escaping to Kiwayu and Lamu and they are being accommodated by the locals before those who have passports board flights and escape from the country. We also have information that some are heading towards Dadaab where they lay down arms only to mingle and disappear within the refugee camp. But that is an internal matter that has to be dealt with by the Internal security organs," a senior military officer said.
The concern comes as after reports revealed most foreign fighters within the al Shabaab ranks have been fleeing to Yemen. Meanwhile, 11 Kenyans are among recruits inducted into and fighting for the Ras Kamboni Brigade led by Sheikh Ahmed Mohammed Islam, aka Madhobe, in the Juba area.
Abdinasir Sheikh, a Garissa resident, is one such recruit who has been fighting with the brigade for the last nine months. The lanky young man, who dons the jungle green tunic of the Ras Kamboni brigade and can pass for a Somalia national, comfortably mingles with KDF soldiers as he chats to journalists in sheng and Kiswahili.
Abdinasir, who tried to join KDF and the administration police thrice and failed in 2003, resolved to join Ras Kamboni brigade. He said many Kenyans have been dragged into the conflict, some of whom have been killed especially in the Elwak area. "There are many Kenyans fighting in al Shabaab and within Ras Kamboni and TFG. There are about 10 Kenyans who are with Ras Kamboni Brigade in this area but i also know that several others are in al Shabaab. TFG has several Kenyans who were recruited in Mandera and trained in Manyani before they were deployed in Somalia," Abdinasir said in an interview in Afmadhow last week.
The young man, whose mother and brother live in Nairobi, said he was recruited and trained by Ethiopians for four months before being deployed to fight against al Shabaab in Bardere, Jaldas and Dhoble. Abdinasir said he earns enough to cater for his two children who live with their aunt...via The Star (Nairobi)
Posted by Siad barre at 8:49 PM