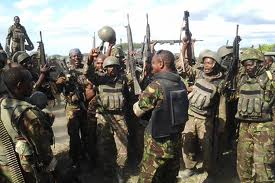 Kenya Defence Force now has its sights trained on Al-Shabaab’s last frontier and lifeline town of Kismayu, Somalia’s third largest town.It could just be days before KDF strikes the heart of the terror cell, having just liberated Afmadhow

Kismayu doubles up as administrative headquarters of Lower Juba, is the main base of Al-Shabaab and is considered its economic lifeline.The Islamic Courts Union (ICU) took over the town in 2006 but it was overrun by Al-Shabaab in August 2008.Intelligence reports indicate that the warlords operating from Kismayu have been forcibly recruiting local youths into the cell and deploying them to fight KDF’s take-over of major towns adjacent to Kismayu.
The key towns that KDF is seeking to liberate from the hands of the militia before shifting the fight to Kismayu are: Jilib, Aglibha, Buula Haji, Bardhere and Bibi.In an effort to prevent KDF from advancing further, the terror group’s fighters are said to be keen on protecting a key bridge linking Afmadhow and Kismayu.“The decision to strike Kismayu will be made by AMISOM (African Union Mission in Somalia) and Kenyan soldiers will ensure that all the major towns neighbouring (Kismayu) are liberated,” Colonel Cyrus Oguna, the KDF spokesman said.Following the fierce assault by KDF, Al-Shabaab fighters have lately adopted the use of Improvised Explosive Devices (IEDs) planted on key roads used by Kenya’s advancing soldiers.

“The militia group gets supplies of IEDs from countries that support terrorism in the name of religion,” Lieutenant Colonel Jeff Nyagah, the Commander of KDF’s first brigade said.“Despite setbacks that we have encountered, we are going to soldier on and ensure Kismayu is captured from the hands of terrorists,” Nyagah vowed.Nyagah declared: “We have a mission to fulfil and we have resolved to pursue the militia deep into Somalia. We are out to assist the Somali people by setting them free from the clutches of terrorists.”Al-Shabaab in a desperate effort to rally the Somali people to fight KDF has claimed Kenyans wanted to propagate Christianity in the country dominated by Muslims.“We did not come here to propagate Christianity, as we are only after one group that has committed atrocities against the people. We want lasting peace to prevail in Somalia,” Nyagah stated.Kenyan soldiers are fighting alongside the Somali National Army (SNA) in the region under the command of Brigadier General Ismael Sahardid Keydsanen and the Ras Kamboni Brigade under the command of Sheikh Ahmed Madobe.

“Kenyan soldiers have done a lot for the people of Somalia by liberating major towns which were formerly under the hands of the militiamen. The focus now is on the planned take-over of Kismayu,” Brig Gen Keydsanen said.Mr Ali Mohamud Rage, Al-Shabaab’s spokesman on the other hand has vowed that the militia group will protect the town against attack by KDF.Al-Shabaab has sponsored terrorism in East Africa and threatened Kenya’s security and tourism interests by hijacking ships, kidnapping tourists and interfering with sea-line communication.KDF has so far captured more than 15 towns since the Operation Linda Nchi started on October 14, 2011.
Colonel Daniel Bartonjo, the deputy sector commander listed towns captured by KDF in the Central sub sector to include Tabda, Dhobley, Hosingo, Hauina, Xayo, Diff, Belesc Qogani, Gherile, Shabah and Afmadhow.In the Northern sub-sector, the towns of Damass, Elade, Fafadun, and Busaar have been liberated.

Al-Shabaab staged the biggest resistance against KDF at Dhobley, which was one of the most strategic towns for the militia owing to its proximity both to the Kenyan border and Dadaab refugee camp.“Al-Shabaab deployed 800 fighters to defend the town leading to a fierce battle that lasted six hours. In the aftermath, 200 militiamen lay dead,” Lt-Col Nyagah said.A total of 68 Al-Shabaab fighters are said to have been injured in the battle and for the first time, their fleeing comrades abandoned the injured. via The Standard