US declassifying counterterror campaigns in Yemen and Somalia; no mention of drones. The Counter Terrorism All Star – U.S. Drones 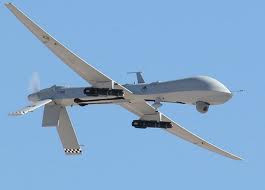 US declassifying attacks in Yemen, Somalia

The White House is partially lifting the lid of secrecy on its counter terrorism campaign against al-Qaida in Yemen and Somalia by formally acknowledging for the first time that it is conducting lethal attacks in those countries, officials said Friday.

The White House's semiannual report to Congress on the state of U.S. combat operations abroad, delivered Friday, mentions what has been widely reported for years but never formally acknowledged by the administration: The U.S. military has been taking "direct action" against members of al-Qaida and affiliates in Yemen and Somalia.The report does not elaborate, but "direct action" is a military term of art that refers to a range of lethal attacks, which in the case of Yemen and Somalia include attacks by armed drones. The report does not mention drones or other weapons.

The report applies only to U.S. military operations, not those conducted by the CIA.The report does not provide details of any military operations in either Yemen or Somalia. It merely acknowledges they have happened. Killings of terror suspects overseas are acknowledged but the administration doesn't acknowledge the involvement of drones.The decision by President Barack Obama to declassify the existence of the counter-terror actions in those two countries amounts an incremental move toward greater openness about the use of U.S. force overseas.

The new information in the report comes amid outcries from some in Congress about leaks to the news media about details of classified activities such as the existence of a White House "kill list" of targeted al-Qaida militants. The accusation, mostly by Republicans, is that the White House has orchestrated the leaks to improve Obama's re-election chances, an allegation the president has rejected as "offensive" and "wrong."

Three administration officials who briefed The Associated Press on the decision to declassify the existence of the military's counterterrorism campaigns in Yemen and Somalia said Obama determined that the time was ripe, in part because the U.S. has built closer relations with the Yemeni government and with governments interested in eliminating extremist elements in Somalia. Somalia has not had a fully functioning government since 1991.
Posted by Siad barre at 10:33 AM