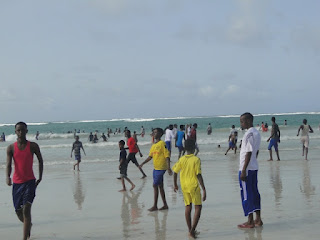 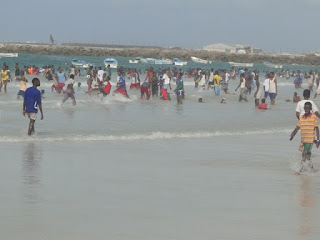 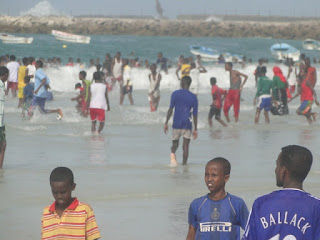 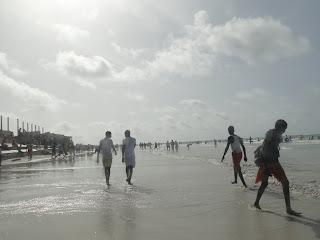 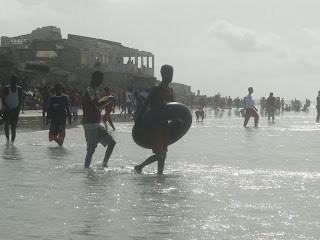 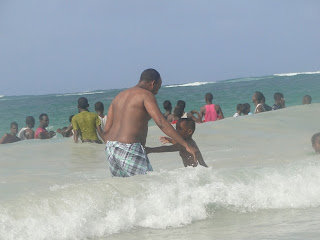 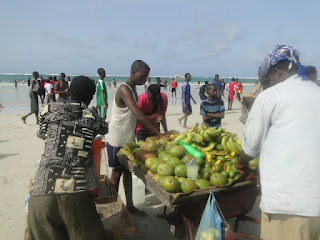 If there is a single image that encapsulates Somalia's violent past, its wary present and its uncertain future, it may be the view from the gutted shell of the once-stately Uruba Hotel.From the second floor, where fist-sized rocks cover the floor and steel reinforcers hang from the pitted ceiling, the space where the walls used to be offers a view across a shattered city.Silhouetted on an upper floor of a former bank are two Ugandan troops, members of the Africa Union's peacekeeping force Amisom.Nearby, a slender piece of stone – all that is left of the cathedral's twin towers – reaches into the sky. To the left is the Arch of Umberto, built by the Italians in the mid-1930s.Down by the waterfront, men, women and children cool themselves in the choppy waves under the old fort, in a sign of the tentative peace which has held in the city over recent weeks. A boy in a yellow sarong runs into the water, towards fishing boats bobbing serenely in the Indian Ocean.Standing amid the rubble, Lieutenant Jimmy Omara dares to predict a brighter future. The Ugandan soldier points to the horizon, explaining how Amisom troops have extended their reach since he arrived in the Somali capital two months ago. "When I came, we were only here. Now we are 18 kms away. We plan to go further than that."Before the Islamist rebels of al-Shabaab decided to make a stand here, the Uruba hosted rich and powerful guests from as far afield as Saudi Arabia. Today it is a base for Uganda's Battle Group 9+. There are sandbags on the wide stairs and tents in the corridors.If the Uruba is a symbol of the fighting that has brought Somalia to its knees, the presence of Amisom troops places the hotel on the threshold of a possible new era for a country where many teenagers have known nothing but war and hardship.Al-Shabaab's fighters mainly withdrew from Mogadishu last August after months of building-by-building battles with Amisom troops. They vowed to change tactics and have since carried out a string of suicide bombings and gun attacks in the city.But late last month, Amisom pushed them out of Afgoye, a strategic stronghold 30km from Mogadishu, where Amisom officials say the militants used to manufacture explosives used in attacks on the capital. The insurgents have also lost ground in the south, where Kenyan troops have inched towards the port stronghold of Kismayo, and are under pressure from Ethiopian troops in the centre of the country, but Brigadier-General Paul Lokech, the commander of the Ugandan forces, warns that al-Shabaab are not finished yet. "We haven't yet dealt with the al-Shabaab cells in Mogadishu … We are encouraging national security and police to deal with the problem."But al-Shabaab, which includes Britons, Americans and other foreigners in its ranks, has been weakened and – at least in Mogadishu – freedoms long forgotten are slowly being recovered.Where once the Islamists banned football and scared residents went home long before sunset, the capital's main streets were bustling one evening this week as a convoy of Amisom armoured cars brought visiting journalists back from a trip to Afgoye.The incongruity of travelling in an armed convoy through streets packed with women in long veils and dresses, past children kicking balls, and men arguing over bus fares typifies the tentative transition from conflict to a fragile and ill-defined calm.Women in pink, orange and yellow veils wandered along crowded pavements beside roads crammed with donkeys, carts and SUVs, shiny and dust-free after being hosed down at the city's many street-side car washes.Al-Shabaab, which formally allied themselves to al-Qaida this year, installed a harsh form of sharia law in the areas they control.But the months of relative peace since they were forced out of the capital have allowed sports leagues, restaurants and even a little night life to flourish.Lokech is determined to extend Mogadishu's freedoms beyond Afgoye and through the surrounding Lower Shabelle region.With security improving, there is danger, however, of a power vacuum. Lokech says that the members of the UN-backed but widely discredited transitional federal government must also move on, by clearing the way for a new administration by 20 August.This deadline is part of an agreed roadmap for change. Given the impossibility of holding elections, traditional elders will choose a constituent assembly, which will then choose a parliament, which will elect a president. But in a sense, the politicians are being bypassed by events – for most Somalis, it seems political progress comes a poor second to security.For now, in and around Mogadishu at least, Amisom appears to be delivering that, but the risk is that freelance militias and warlords could fill the void left by al-Shabaab. Lokech is adamant that must not happen. "I want to make it very clear: the warlords do not have space … They either stick with the government or I will treat them like al-Shabaab," he said.Militias are reportedly already preying on displaced people whose flimsy huts dot the city, bright flashes of colour between bullet-pocked buildings.A UN official put it bluntly as he toured a camp for displaced people."This is a self-service supermarket without a cashier. You take what you want if you have a gun."  via  Guardian