update on KDF goes for Al-Shabaab’s heart The new acting minister for internal security Yusuf Haji took over his new docket Tuesday. He pledged to continue operations on the Al-Shabaab militants and other criminal gangs in the country. 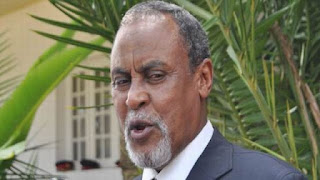 Haji said his priority will be to ensure the country holds peaceful elections free of violence and any other threats.“My priority will be to ensure the country has peace and stability ahead of the elections. All internal and external threats including those from the illegal gangs will be dealt with,” said Haji.The minister who reported to his workstation yesterday morning said his experience in the provincial administration and now ministry of defence gives him an upper hand to deal with the security threats that Kenyans are facing.He said he will work with the ministry officials to ensure pending matters are addressed within the stipulated time. He reported as he signed an MOU with his Ethiopian counterpart on how the two countries will deal with cross border crimes.He was welcomed by assistant minister Simeon Lesirma and permanent secretary Mr Mutea Iringo.The officials briefed the minister on the major challenges they are facing include the threats posed by Al-Shabaab militants and local banned criminal gangs, coming elections and police reforms.The officials also said that the poor funding to the ministry is also a major challenge because they were not allocated what they wanted.The ministry wanted over Sh100 billion for their operations but was allocated Sh83.5 billion – in this financial year, an increase of about Sh5.5 billion from the previous vote of Sh78 billion during the 2011/2012 Financial Year.“We are happy you come in with richness from your current ministry. We received below what we expected,” said Lesirma.Lesirma added they intend to fully implement the Mututho Laws and deal with the menace of consumption of alcohol next month.Haji later held a closed door meeting with the departmental heads of the ministry.He was appointed following the death of his predecessor Prof George Saitoti who died in a helicopter crash together with his assistant Orwa Ojode last week. The two were buried over the weekend. Via  The Standard