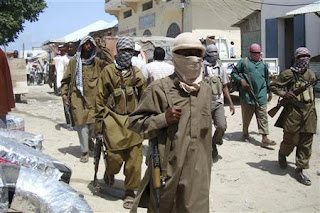 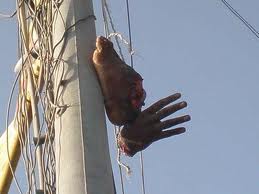 ELBUR (tf.sf) – The administration of al shabaab movement in Elbur district in Galgudud region of central Somalia on Sunday amputated the right hand of Somali young boy who they accused of theft. Hundreds of local residents were called upon an a square just out side of the district where Al shabaab fighters carried out the amputation verdict.
Officials fro Al shabaab in the region were also present at the scene. Al shabaab’s judge in the district who was identified as Sheikh Sa’id announced that the young boy confessed of committing theft. Reciting the 38th verse of surat Al Maidah, the judge ordered the right hand of the young teenager to be cut off.
Al shabaab apprehends more 150 in southern Somalia

WANLAWAYN (TF,SF) – The administration of Al shabaab in lower Shabelle region in southern Somalia on Monday has taken more than 150 people into custody. Reports emanating from the region suggest that the detainees were from what they called the clerics of Takfir.
Reports added that a number of Al shabaab fighters have raided several villages in Wanlawayn where they conducted sweeping crackdowns against Takfir group. A witness told  media a that all apprehended were used to be members of Al shabaab, but he declined to give further details about the aim behind their arrest. However, Al shabaab officials have not released any comments about the incident.

KAMPALA (TF.SF) – Ugandan police said they believe terrorists are targeting Kampala before national elections this month, the latest in a series of threats since twin bombs killed 79 people in the capital last year. Police told people living in Kampala to look out for 'unexpected gifts, flowers,' prompting one newspaper to warn readers of a potential plot on Valentine's Day, four days before the February 18 poll. However, the opposition said it feared the government could use the alert for a clampdown before the presidential and parliamentary elections. 'We have received credible information of a plan by terrorists to carry out attacks during the last days of the elections,' Uganda's top police officer, Inspector General Kale Kayihura, said in a statement late on Saturday. 'Consequently, the police supported by the other sister security agencies are stepping up vigilance to avert these evil plans.' Suicide blasts tore through two Kampala bars on July 11 while people were watching the World Cup soccer final, marking the first attacks on foreign soil by Somalia's al-Qaeda-allied al Shabaab militant group. Al Shabaab has threatened to carry out more attacks until Uganda and Burundi withdraw their troops from an African Union force protecting a weak United Nations-backed interim government in Somalia.
Analysts widely expect long-serving Ugandan President Yoweri Museveni to win a fourth term despite a strong challenge from former ally Kizza Besigye, who has run twice before. The opposition, however, have been eating into the president's rural base and say that, if they lose, it will be because of rigging. Besigye
Al Shabaab atrocities update : Al-Qaeda's proxy in Africa Al-shabab cut of the tongue of a young man: 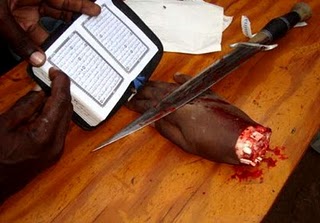 More proof of what happens when mud people are allowed any form of rule...