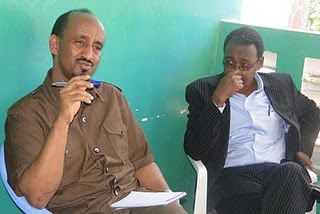 Mogadishu(TF.SF) — Somalia's minister of defense, Abdihakim Hajji Mohamoud Fiqi on Monday said that they are accumulating their power in launching huge offensive to tear down Al shabaab fighters.Speaking to journalists in Mogadishu, Mr. Fiqi indicated they have several times tried to open negotiations with the group but said all failed after they remained defiant.He said that Somali transitional federal government is in zero tolerance after Al shabaab increased the hurdle and difficulties on Somalia's tired people from protracted wars and conflicts.The defense minister vowed that they will soon launch government's long threatened offensive against Al shabaab, which declared it allegiance to Al Qaeda network 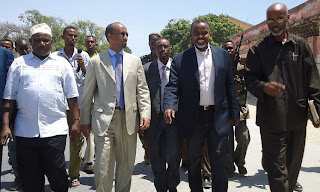 In a day of fighting in Mogadishu on Monday, death toll is reported to rise, witnesses and medical officials said.At least 6 people have been killed and more 15 others wounded after bitter combat between Somali government forces, Ahlu Sunna fighters supported militarily by Africa Union peacekeepers that occurred in the Somali capita.Medical officials confirmed that that nearly twenty people were admitted oto medica centersIn a related development, Yonis Ali better known as Japan, an Ahlu Suna official, told Moagdishu redio that they had the upper hand during today's Mogadishu battles.He said that they captured two Al shabaab fighters alive, promising they display to the media as quickly as possible...we'll keep you updated.
Posted by Siad barre at 3:50 PM