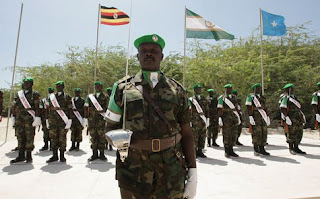 Honoring those who fought and died in somalia

Bujumbura, Burundi (PANA) - Six Burundian soldiers were killed and a dozen others wounded in clashes which started Sunday between forces of the African peacekeeping Mission in Somalia (AMISOM) and Islamist insurgents of Al Shabaab, according to an official statement issued Friday in Bujumbura.

"AMISOM, in general, and Burundi, in particular, reported the death of six peacekeepers and 12 wounded in the fighting Sunday between the government forces and the extremist elements of Al-Qaeda and Al Shabab " according to the statement issued by the Department of National Defence Force and Veterans.
Burundi and Uganda are the only countries to have sent troops in 2007 to the peacekeeping mission in Somalia under the banner of the African Union (AU). Troops deployed as part of AMISOM have not yet hit 10,000 men, whereas the AU requires at least 15,000 to overcome young al Shabaab Islamists, opposing the government in power in Mogadishu, and any presence of foreign military forces. During the umpteenth attack, Somali government forces, supported by AMISOM, reportedly took control of two strategic positions in Mogadishu, including the former Ministry of Defence (Khashandigha) and the former Dairy (Milk Factory), the statement said. The peacekeeping forces in Somalia are often the target of attacks by Al-Shabaab and the Burundian contingent already regrets the loss of 30 elements, including the former deputy commander of AMISOM, General Juvenal Niyoyunguruza. Burundi's military presence in the Somali quagmire remains surrounded with controversy among the national opinion, especially for not having been authorized by the Burundian parliament. But the Burundian government see its involvement in Somalia as an expression of gratitude to the international community which assisted it at the height of its civil war.