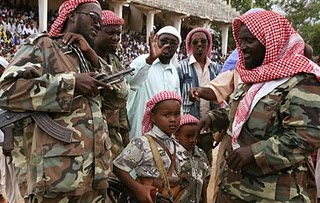 Dolow — The administration of moderate Ahlu Sunna Waljama's ASWJ on Sunday charged Al shabaab fighters in Gedo region in southern Somalia with starting of recruiting toddlers and women to fight from their side.
Sheikh Sharif Sheikh Abdiwahid, the spokesman of Somalia's moderate Ahlu Sunna Waljama' said in an interview with Shabelle Media Network that they have come to know Al shabaab officials in Gedo began delivering addresses to the local residents inciting to follow them and fight against Somali transitional federal government forces and Ahlu Sunna fighters in the region.
Abdiwahid indicated that Al shabaab want to force women and children in the fighting, calling the people in Gedo region to take precaution against Al shabaab lure.
He also talked about the droughts that struck many parts of the country including the region of Gedo in southern Somalia, saying that it had affected both the human being and domestic animals.