MOGADISHU (Reuters) - Somali's hardline rebel group al Shabaab threatened on Sunday to attack neighbouring Kenya for training Somali government forces and allowing Ethiopian troops to operate from its towns.
The group, which is aligned to al Qaeda, has said before that it would attack Kenya but so far has never done so.
Last year, the insurgent group bombed Uganda in twin attacks that killed nearly 80 people. It said it was in retaliation for Kampala providing peacekeeping troops that have helped Somalia's government stay in power.
"Kenya has constantly disturbed us, and now it should face the consequences of allowing Ethiopian troops to attack us from Mandera town," al Shabaab spokesman Sheikh Ali Mohamud Rage told a news conference.
The threat comes in the wake of a new government offensive that has seen Somali forces claw back parts of Mogadishu.
Somali troops backed by government-friendly militia have launched operations in several towns across central and southern Somalia including the al Shabaab-controlled border town of Balad Hawa, a few kilometres from the Kenyan town of Mandera, and Ethiopia.
Somali troop numbers have been bolstered by the deployment of hundreds of new recruits trained in Kenya and Ethiopia, local residents and security sources say.
"We have never openly fought Kenya but now we shall not tolerate any more. Kenya has been training soldiers to attack us. It has also given bases to Somali forces we drove away from Kismayu," Rage said.
KENYANS FLEE BORDER TOWN
Al Shabaab has also threatened to hit Ethiopia and Burundi, which has troops protecting the western-backed government in Mogadishu.
Last year, a video posted on the Internet showed chanting men that claimed to be al Shabaab threatening to hit Nairobi for a crackdown on Somalis in the country.
Al Shabaab spokesman Rage disowned the posting then and said he had no idea who was responsible for uploading it.
Kenya has been a victim of al Qaeda strikes twice in the past -- a 1998 bombing of the U.S. embassy in Nairobi and an explosion at an Israeli-owned hotel at the coast in 2002.
The fighting in Somalia's Balad Hawa has paralysed life in the Kenyan town of Mandera and forced residents with homes close to the boarder further inland, an aid official told Reuters.
"Mandera is now a battle ground. Several stray bullets from Somalia and Ethiopia have come towards us. So far more than 15 people have been injured," a staff member at a charitable organisation in Mandera told Reuters.
Some foreigners working for international non-governmental organisations had also left the town for the capital, he said. 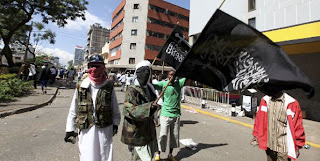 Veiled protestors hold the flag of Somali rebel group al Shabaab during a demonstration outside the Jamia Mosque in Kenya's capital Nairobi on January 21, 2010. Al-Shabaab spokesman Sheikh Ali Dhere on February 27, 2011 accused the Kenyan Government of being behind “the trouble” in some Somali regions bordering its territory. Photo/FILE

Radical Islamist group al-Shabaab has warned of a “revenge” attack against Kenya for aiding the Transitional Federal Government in Somalia.
Sheikh Ali Mohamoud Raghe alias Sheikh Ali Dhere, the al-Shabaab spokesman on Sunday accused the Kenya Government of being behind “the trouble” in some Somali regions bordering its territory.
He pointed a finger at Juba and Gedo regions, south and southwest of Mogadishu, respectively.
“Previous warnings to Kenya were nothing compared to this one,” said the al-Shabaab official. “We are going to retaliate against it (Kenya), harshly,” he declared.
He accused Kenya of assisting the pro-government forces in their attacks against al-Shabaab positions.
About 600 Somali soldiers training in Kenya have been moved to a camp in Elwak in Mandera awaiting deployment into Somalia as war escalates between government forces and insurgents. (Read: Blast at Mandera hospital as border clashes rage)
They were relocated to the camp in two groups of 300 in Kenya military trucks over the past one week ahead of possible deployment to reinforce the TFG soldiers in Bullahawa town in Somalia, the Nation has learnt.
And in Mandera, the Kenyan military upgraded its alertness on the border to “amber” as fighting between al-Shabaab and the TFG forces, who are assisted by the African Union, continued on the fifth day.
The government has sent more personnel to the Kenya-Somalia border to stop al-Shabaab militia from crossing into the country.
The military has also cautioned parents living along the border with Somalia to watch out for al-Shabaab members who are recruiting youth to go and fight in Somalia.
“We have heightened security along the border and soldiers are on the lookout in case of any spillover from the fighting in Somalia.
“We are aware of Kenyan youth being lured by promises of large sums of money to go and fight alongside al-Shabaab in Somalia,” Department of Defence Spokesman Bogita Ongeri said on Sunday.
“We cannot allow the militia nor their associates on our soil, as they are a threat to humanity,” Mr Bogita added.
Meanwhile, thousands of refugees have been fleeing from areas close to the border. (Read: Fresh wave of Somali refugees flee to Kenya)
Kenya Red Cross Society spokesman Titus Mung’ou said the society has identified a camp that will accommodate 500 households of about 3,000 refugees.
Two Cabinet ministers from North Eastern Province said 35,000 residents had been displaced due to the fighting.
Mr Mohamed Elmi, the Minister for the Development of Northern Kenya and other Arid Lands and Mr Mohammed Mohamud, the assistant minister for Energy, warned of a humanitarian crisis unless adequate security measures were put in place. DAILY Nation