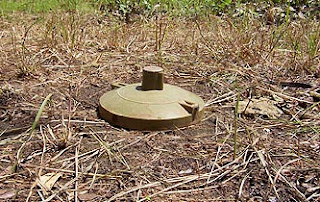 Wednesday, 16 February 2011 14:50 Kalshaalle:{TF.SF}:
As you all may know there was heavy fighting between the people of Buuhoodle town and Clan Militias that were aided by Somaliland forces, the fighting left dozens dead on both sides with independent eye witnesses confirming that Somaliland and their clan militias suffered a heavy blow. The People of Buuhoodle and Sool Sanaag regions in general disdain any form of oppression having fought the British for twenty one years. On Friday 11th of February Mohamed Abdisalaam a herd’s man who grazes his Animals between kalshaale and Buuhoodle was shocked when one of his Camel was hit by a Landmine Planted by Somaliland Clan militia Mohamed describes the aftermath of the Accident “I was walking with my camel when all of a sudden I heard large Bhang and saw smoke just a few meters before me lay One of my camel bisected into two by the explosion I could not understand what has happened as I have never seen such a thing “.Mohamed who was visibly shaken by the incident says it is unsafe for people and animals to travel that route .There are number of reliable reports from local media outlets that confirm the existence of Land mines in the said area which have been planted soon probably in the aftermath of the Fighting. Mines kill people during and after wars and in an area widely used by uneducated nomadic pastoralists the effects are unimaginable these heinous crimes should be immediately Condemned and we urge all NGOs and parties concerned to immediately investigate and follow up these reports. Thousands of People through-out the world step on anti-personal land mines or explosive remnants of war causing death .amputation and injury in most cases most of the victims are children. Besides causing individual suffering, antipersonnel Landmines (APL) and explosive remnants of war (ERW) are also responsible for serious social and economic problems. They land into no-go zones, hindering fertile agriculture and Development. In post-conflict societies APL and ERW can impede the return of refugees. We urge the United Nations to act swiftly and prevent war crimes in the Kalshaale Region.