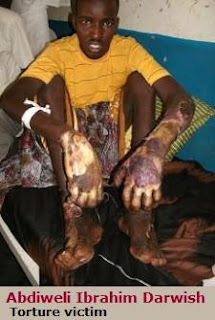 Buhotle: (TF.SF) - Somaliland Army has been fighting pro-union forces in the last six months or so. The group known as SSC (Sool, Sanaag & Ayn regions) has situated their administration in the town of Buhotle and surrounding villages. This area belongs to Dhulbahante clan of the grand Darod Tribe, and along with Warsangeli (another Darod clan) fiercely oppose Somaliland's quest for independence from the rest of Somalia. During the latest fighting of which the resistance forces finished victorious, many rural pastoralist had fell victim to Somaliland's defeated forces. Abdiweli Ibrahim (picture on the right) has been hanged from a tree for three days. He was inhumanely burned and beaten unconscious, and later hanged from a tree branch.

Abdiweli's predicament begun after Somaliland Army and local resistance forces engaged in a battle at Kalshale, a small village 25 km from Buhotle. He was caught by Somaliland's retreating forces while Abdi flocked his herd of camels near by valley. According to Abdi, "angry soldiers rushed towards me and grabbed me. They started hitting me with their fists and the barrel of their guns, while others kicked me in the stomach and the head...They yelled! You going to die, we will kill you," Abdiweli Ibrahim said.
Abdiweli was left dead, hanging from an acacia tree. Three days later a rural dweller found Abdi alive hanging from the tree. Abdi was transported to Galkayo Hospital, some 300 km from where the incident happened. He was immediately admitted into the ill-equipped hospital in central Somalia. Abdiweli sustained life threatening injuries especially his hands and legs where the tight rope had cut into his skin. Doctors at Galkayo Hospital believe Abdiweli may live if treatments work well . The hospital lacks modern medical equipment which would have been used to conduct restorative surgery, such as the one Abdiweli so desperately needs.
The incident outraged Somalis everywhere, appealing international human rights organizations to take necessary steps against the Somaliland's secessionist leader, Ahmed Mohamud Silanyo who ordered troops to carry out systemic genocide on the people of Ayn Region in Puntland.

some  background related to  the story

SNM aggression on SSC people is crime against humanity : Somaliland Forces Should Leave From Kalshale Village

CRIMES AGAINST HUMANITY COMMITTED BY SECESSIONIST SO CALLED SOMALILAND Leader