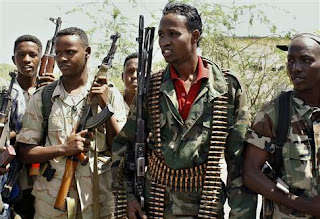 OGADISHU, Somalia — Officials say Somalia has launched a coordinated offensive against al-Qaida-linked militants that has seen heavy fighting in the capital and skirmishes on the Kenya-Somalia border that have involved Ethiopian tanks.
Kenyan troops have been sent in to defend the border.
Somalia's defense minister announced the new offensive on Wednesday. Somalia's prime minister, Mohamed Abdullahi Mohamed, said his troops are prepared for "war."
The push in Mogadishu is by 8,000 African Union peacekeepers and thousands more Somali forces who are working to defeat al-Shabab, Somalia's most dangerous militant group. >>more
Posted by Siad barre at 10:25 PM